2020 is not letting up. Now my dad’s going to the hospital right now because the VA sent him some penicillin for a sinus infection (which has never bothered him before) and his tongue is swollen so bad he can’t breathe. I am shit scared that he’s gonna get the covid and never come back out.
Top

It really does seem to have been a bog standard allergy attack because an EpiPen, oxygen, and an IV took the swelling and rash down after about 90 minutes. They tested for covid and it was negative, but he’ll have to take another test in a couple of days. But from the tests, it really does look like he has a sinus infection and that his doctor prescribed him the wrong thing because he’d never had a problem with penicillin before.

Seeing someone’s tongue swell up so much that it doesn’t fit in their mouth is scary as fuck. Anyway, he’s got some EpiPens and diphenhydramine and that should be enough if he has another attack (which hopefully he will not, because if I get my way, that shit is going to the pharmacy to be disposed of properly).

I’m absolutely exhausted. Today I had to email my psych and have my dosages adjusted so tapering off clonazepam would be easier, then go get those drugs while I was struggling with mood swings because I can’t use a pill cutter properly, then I tried to relax, and then this happened. 2020, man. What can you say? Everyone’s having a rough time.
Top

Here is why I get grump at my pill cutting skills: 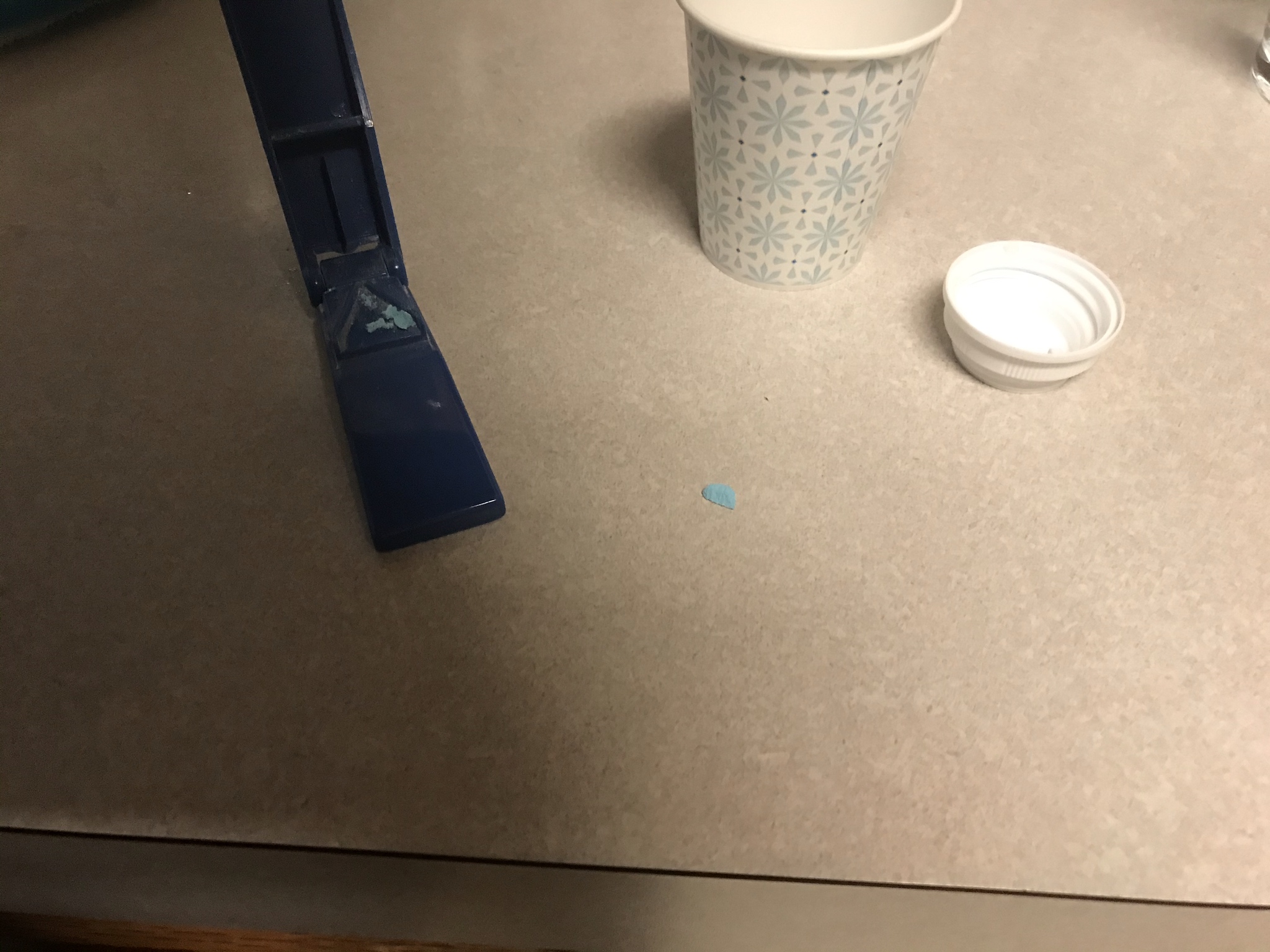 I have 3 different pill cutters to use (my mom’s, my dad’s, and the one I picked up the other day). You can see how much got left in the cutter that I had to clean out, hopefully (it is not a great photo). It doesn’t seem to have been a problem because the withdrawal side effects are calming down from the beginning of the week, I just wish I could do a neater job. It always looks perfect until I pick up a half to take at night

I can’t find any places where I’m comfortable posting online any more because I’m foo fucking annoying and juvenile to people, so I guess that’s that. permanent lurker mode activate

But you're not annoying, and you're one of the more mature people I ever encountered online. Even if your interests are considered juvenile, so what?

If you need to take a break, that's perfectly acceptable. But remember that we like you around here\

Because everywhere I go, I annoy people, or they think I’m acting out for attention, or they get pissed off at me, or I get pissed off at them and act like a total shit. I’m the only common factor in any of these interactions, so the problem is with me. The harder I try to be a good and mature person, the worse it gets, so I’m obviously failing.

I just alienate people whom I would prefer to have as friends by yelling at them or saying something dumb or completely inadequate or inappropriate to the situation. It’s always been like this, ever since I was a kid. This is probably the longest I’ve been around a community because I usually just piss everyone off within a month or two and give up.

I need serious help and I’m having trouble getting it and nothing’s going to change while this fucking pandemic is on and society continues to crumble because of the greedy assholes on top who are gleefully wrecking everything and taking all the loot. Why did I think I could handle a relationship when random posts from people I don’t even know make me cry?
Top

Madeline wrote: ↑
Wed Aug 26, 2020 2:02 pm
Why did I think I could handle a relationship when random posts from people I don’t even know make me cry?

This isn't RUSP so I'm just going to point out these two things have nothing to do with each other. By definition, your relationships with strangers are going to be very different than your relationship with a partner.

This stood out to me:

Madeline wrote: ↑
Wed Aug 26, 2020 2:02 pm
Because everywhere I go, I annoy people, or they think I’m acting out for attention, or they get pissed off at me, or I get pissed off at them and act like a total shit. I’m the only common factor in any of these interactions, so the problem is with me.

That's true. You are the only common factor in them. But are you correct in identifying all these situations as problems? Even though you've been in all of them, you've not been on every side of each of them. Are you absolutely certain that others are annoyed or upset with you?

well, this is the second time I’ve hurt someone by telling them I didn’t love them anymore, and tanked a friendship in the process.

so I don’t know, but I do know that constantly trying to pretend that I was okay to the point of lying about it is a big factor. but I didn’t want to talk about my trauma or past any more. and after I did, I felt so exposed that I had a breakdown (see rusp).

so it’s been me at fault at least twice. and I shouldn’t be talking about it because I’m afraid it’s wrong and hurtful, but I also have no one else to talk to right now. fuck.
Top

If you're talking about me, then no, you didn't tank the friendship. If it isn't, feel free to disregard this post. And don't blame yourself so much. It's not like I didn't have a hand in this mess too.

Princess Flufflebutt wrote: ↑
Tue Sep 29, 2020 10:22 pm
If you're talking about me, then no, you didn't tank the friendship. If it isn't, feel free to disregard this post. And don't blame yourself so much. It's not like I didn't have a hand in this mess too.

idk, I feel like I’ve fucked up everywhere I’ve gone this week. I’m really feeling how bad I am at socializing or relating to other people without being able to fake my way through it with bad jokes or small talk. other people have gotten irritated with me a few times now.

sick of this. wish my heart would just hurry up and fail already.
Top

I'd rather your heart not fail. Fwiw, you need to try really hard to ruin things with me. And you have not come even close to that.

Also socializing is fucking hard. I don't blame you for struggling with it.

I don’t know, I just feel like I’m radioactive and disgusting because of the things I went through as a child and it broke me to the point where people find me actively repulsive or obnoxious.

it’s weird that people always say I push people away, when I always feel like I’m being pushed away, and am not brave enough to say anything.

edit: not counting what happened between me and PF because that should stay private and was nobody’s specific fault really.
Top

Everything is still on fire. As in, literally on fire. Been watching it come closer and closer for a few weeks now. The summer heat never broke until a couple of days ago, but that came with high winds that spread everything anyway, and we’re in a bad drought.

Having to go to a shelter during covid, in a place where a sizable number of people refuse to wear masks or socially distance or take any precautions at all, is a frightening idea and now a remote possibility because it’s getting closer
Top

God, that is scary. Stay safe!

Ugh I made a mistake which resulted in my partner being the most upset at me in months, possibly the entire past year,. And I'm nauseous and tired and don't feel like collecting myself to get back into a normally-fun weekend event that happens only once a year.