This came up recently somewhere else and I realized this makes no sense to me. People are always telling me that the reason the US only has two political parties that control everything is because of our first-past-the-post system, where you only get one vote and whoever gets the most votes wins. The alternative would be a system where you rank all the candidates, and votes get shuffled around if no one gets a majority. But to my knowledge, I've only ever heard of this system being used in Australia. Yet it seems like every other democratic country has more than two major parties! Why is that? How is that? Non-Americans, explain yourselves please.
Top

Define "major". The UK has a lot of minor political parties, but only the two major parties have any hope of winning a general election* - the closest the third place one got still required them to join up with one of the big two.

I feel like the reason we can have so many minor parties that can at least get one MP has something to do with the lack of an electoral college system, but I could be off base there!

It's nearly inevitable once you start looking at things through a Game Theory lens. The analogy I learned for this is the "hot dog carts on a beach" thought experiment.

Imagine a length of beach stretching from Left (L) to Right (R) with midpoint M. One hot dog vendor wants to set up shop. He knows that people will always go to the closest hot dog cart. 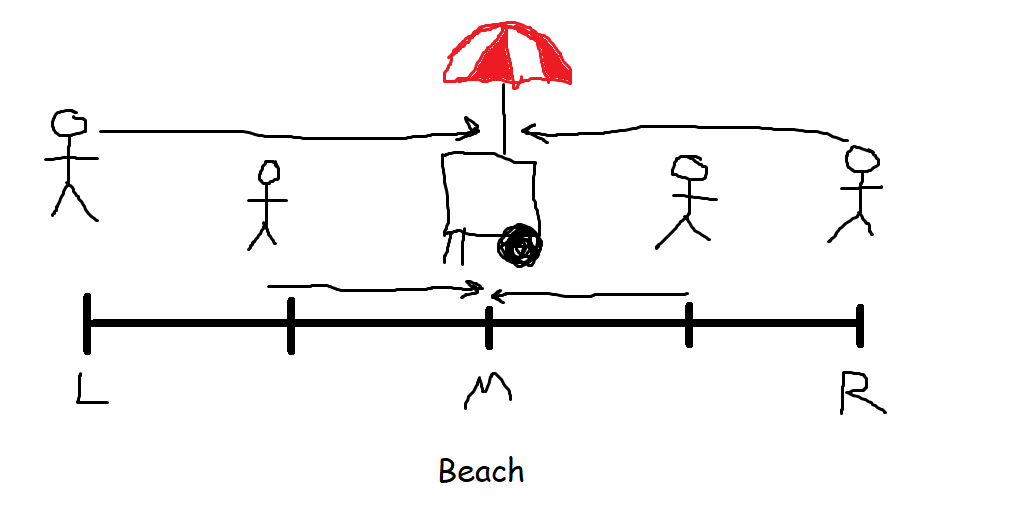 If the vendor sets up in the middle, nobody has to walk further than half the length of the beach.

What if we had two vendors? What would be most efficient then? Well, that would be if they each set up at the one-quarter marks. Then nobody would have to walk more than 1/4 of the length of the beach to get a hot dog. 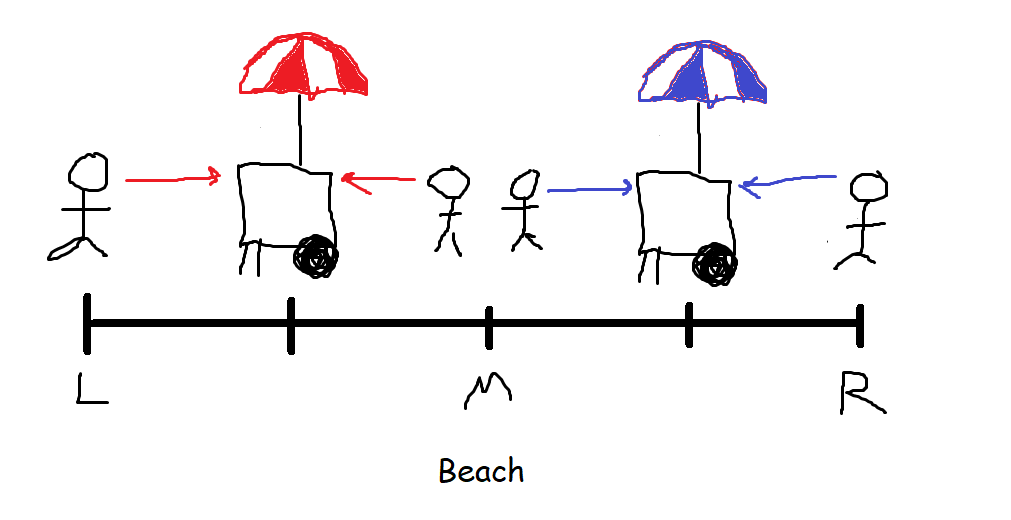 But while this is most efficient for people buying hot dogs, the blue vendor wants to make more money and has a sneaky idea: He moves over right next to the red vendor. 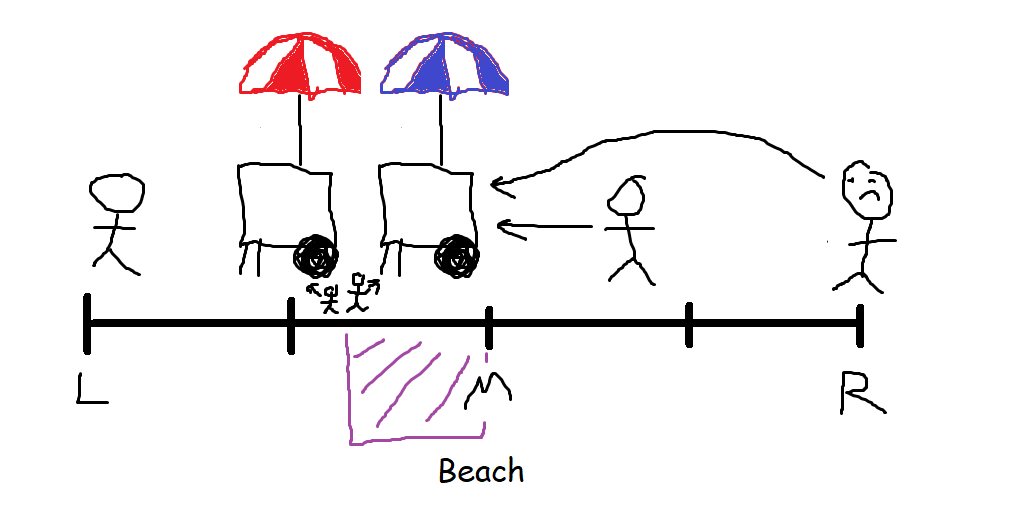 Blue knows that people will always go to the closest cart, and by moving over, he's captured a huge area of the beach that used to be red's area (indicated in purple). Poor Ted, way on the right, has to travel over half the length of the beach to get to a hot dog vendor. Blue is far away, but it's the better of two poor choices.

But let's say Red knows this strategy just as well as Blue and they have to react to each other. Every time one moves off-center, there's a bit of ground to be taken by moving closer to the center than the other guy. Where do the vendors end up? 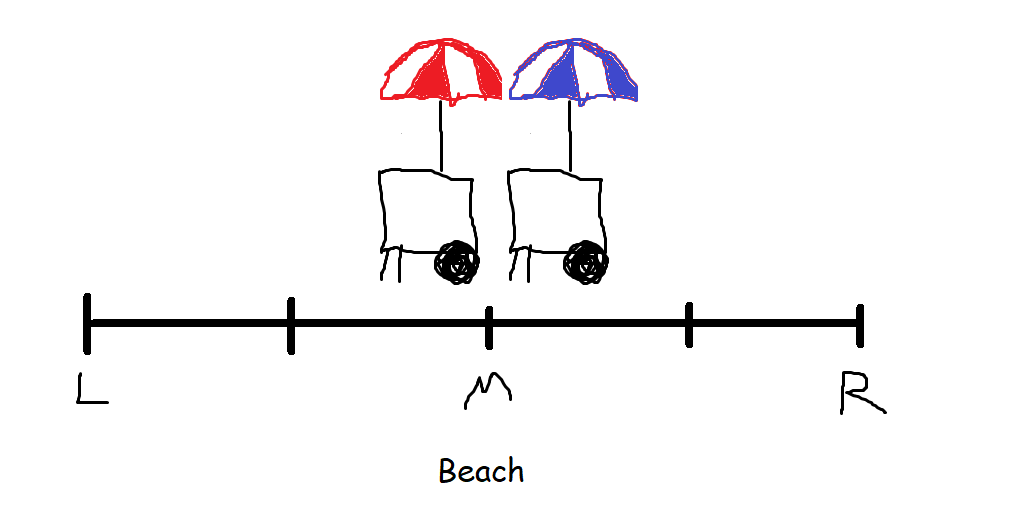 Smack dab in the middle, fighting over the one guy who happens to come in right between them.

Well, heck, that's bullshit, isn't it? What if a third vendor came in and tried to establish a more popular spot? Heck, let's just shove our three vendors into their most efficient spots. 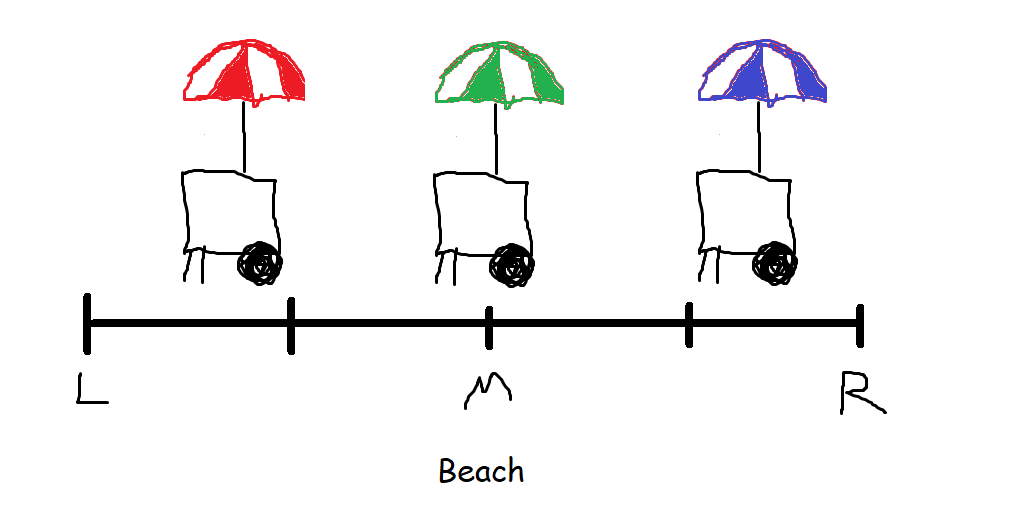 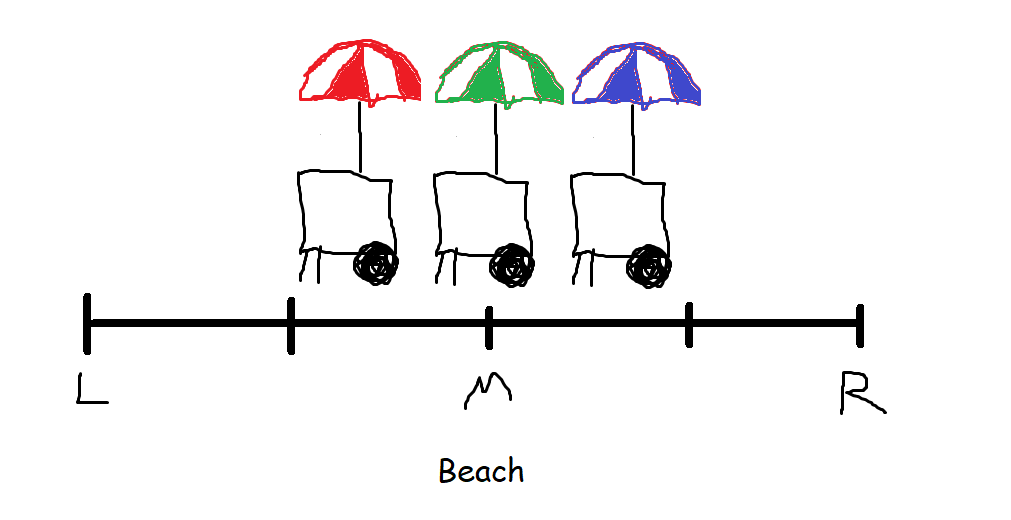 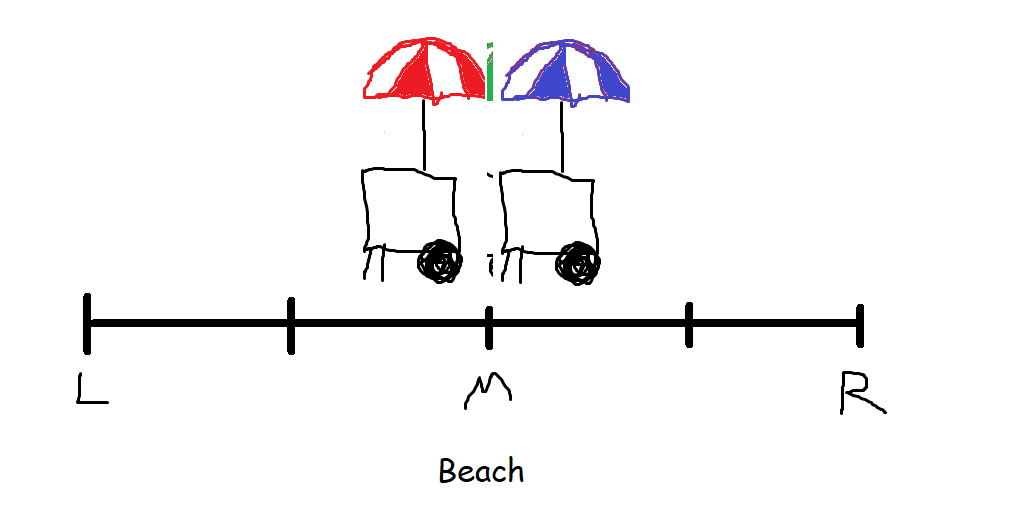 Oh heck, Blue and Red have almost totally crowded out Green. Maybe Green can survive with just that little sliver of the beach, or maybe Green is going to go out of business. Either way, the Green vendor is going to get very little business compared to Red or Blue.

And in a nutshell, this is you go from many specialized political parties across an ideological spectrum to a pair of modestly-differentiated compromise coalitions dominating the field.

Now, this is just a model; it doesn't capture every part of reality. But at the same time, it can capture quite a few complexities with minor modifications. Say Red Vendor didn't care only about the number of hot dog sales he got. Say Red Vendor got a kickback for every hotdog sold on the left side of the beach, because that's where Giant Hotdog Company was located. Red Vendor would have incentive to drag Blue Vendor over toward its side of the beach as well, because the kickbacks would make up for some of the customers lost by ceding customers to Blue. That's how shifting the Overton window in favor of billionaires works.

There is no guarantee that the wizard selling you that bag full of magic sand is wearing pants underneath his robes.
Top

“The United States is also a one-party state but, with typical American extravagance, they have two of them.”
-Julius Nyerere, President of Tanzania (1964 – 1985)

while im sure there's some political science behind facctory factory's post, the thing feels a little post hoc: because america has two parties, two parties must be the rational outcome. game theory provides a rational reason why the are two parties so lets stop thinking about it.

that this model does not acknowledge the functioning republics that have more than two parties yet somehow seem to function and are not america is not considered. they tend to be parliamentary models however, rather than america's bizarre model that seems entirely designed to keep the primary decision bodies (executive and senate, who in unison appoint the most powerful of the judiciary) in the hands of the very rich and/or the people who get money from the very rich. mostly because the founding fathers designed the system this way because while they hated the idea of a tyranny, they also really hated pure democracy and the idea of the average yokel who wasn't an educated white male land and or slave owner voting and having a say in government.

the truth is america is a two party system because of decisions made in history by people who wanted to maintain power for themselves but make sure they could have friendly disagreements with their buds, because the system was founded to limit the amount of power purely to white land and or slave owners, the extent of opinions and ideologies were highly limited and controlled by the powers at be, and were largely divided on north versus south lines.

almost two and a half centuries later, very little has changed.

And despite your assertions about the history of the United States, the Federalist papers were extremely clear that they envisioned the United States under the Constitution to make political parties impossible and transitory ("Factions" of any sort, really), not inevitable. What changed is that the vote expanded to more people with more diversity of opinion on matters of policy, and that meant that democracy needed more actual work to be done, and by people who weren't rife with spare cash and leisure time. And since the US was a laissez-faire hellhole at the time, albeit pre-industrial, organizations popped up to organize and do the work more efficiently.

The vote went from "rich white landowners" to "basically any white adult male" within about the first 40 or 50 years of the Constitution and turnout as a percentage of population increased by an order of magnitude. We consider our pace of life rather break-neck these days in comparison to the early 1800s, but can you even begin to imagine how things could be different if 10 times more people were voting now than had in 1980 and all of that voting came from a previously-unenfranchised body of highly diverse opinions? Even women's suffrage only doubled the voting populace.

There is no guarantee that the wizard selling you that bag full of magic sand is wearing pants underneath his robes.
Top

I was very drunk while on vacation when I posted that and was for also for that reason under the impression that this was posted in PPPP. While I have merited issues with post-hoc justification of existing power structures, my post wast trite and dismissive in a way that was unbefitting of the soapbox, and I was being a dick to Factory who was just trying to answer a question.

This came up somewhere else today, and I think I've hit on a plausible explanation. The big difference between the US and countries that have a parliament and a prime minister is that we treat the election of our president as its own separate thing that, even in the very brief time when citizens didn't vote directly for their candidate of choice, was still something of an attention sink. A whole election just for the head of state, how exciting! How surely way more important than those other, lesser elections! And since there can only be one president, those elections inevitably stuck to having two lead candidates lest someone split the vote. Sure, different states have their own local Overton windows that you'd think might lead to the formation of regional third parties with more extreme positions than you'd see elsewhere, but the two parties that consistently produce presidential candidates are going to be the center of attention. So instead those two parties just adapted themselves to the sensibilities of every region. In fact, I've heard that for most of the country's history, neither party had a consistent position on most issues even at the national level—like, you literally might not be able to pin down either one as the "left wing" or "right wing" party.

Mind you, I'm not saying that we should start letting Congress choose our president either.

Though I am disappointed that neither of our resident Germans have weighed in on this. Doesn't Germany have something like seven major parties at the moment? I'd like to know more about that.
Top

Pocket wrote: ↑
Sun Nov 10, 2019 2:29 am
Though I am disappointed that neither of our resident Germans have weighed in on this. Doesn't Germany have something like seven major parties at the moment? I'd like to know more about that.

Sure, what exactly do you want to know?

Spain had a two party system for a long time that only recently started getting fragmented into the current situation with 5 major parties. Our politicians are so direly unprepared for this that we've had four elections in four years (in fact today is election day again). They're simply not ready to negotiate and form a proper government, so it's been an uphill battle every time.

The reason that system came to be is that our electoral law specifically tried to prevent small parties from forming in a similar way that first past the post does. The larger your amount of votes the easier it is for you to get seats in Parliament from those votes. It encourages big parties and discourages third parties from forming: https://en.m.wikipedia.org/wiki/D'Hondt_method
Top
Post Reply
11 posts • Page 1 of 1