It's insane that the series has been as long as it got, including all the side series like the Micro-Series, Friendship Forever, Legends of Equestria, Fiendship is Magic, Equestria Girls and Holiday specials, and the hand full of mini series like Feats of Friendship.
Just recently I got my two comic short boxes so full that they cannot fit any additional comics.

Saying that I still wished the main series with its 10th season was a little longer as the arcs felt a little short for what it's building up to.
"The knack of flying is learning how to throw yourself at the ground and miss." - Douglas Adams
Top

I can't help but be curious as to who makes up the Knights of Order.

My Little Pony / Transformers II: The Magic of Cybertron #3
In the penultimate issue, both stories were pretty good. 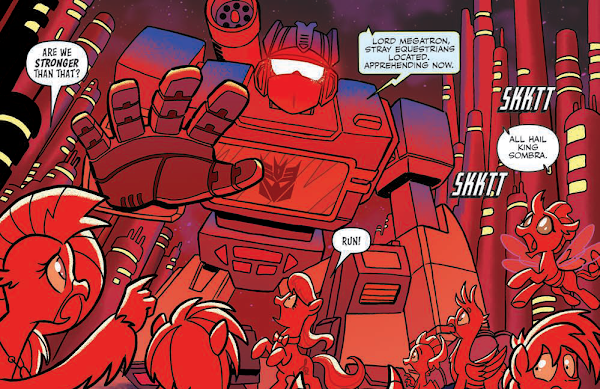 The first featured a lot of characters, with not just Vinyl, Octavia, and Soundwave teaming up, but also all of the Student Six. All things considered, given the limited number of pages, the balance of characters was pretty nice. Art-wise, it was weird that Gallus was so big, but it was otherwise good at getting across expressions, and the awesome musical team up.

The second story featured the unusual combination of Rarity and Ratchet. Once Knock Out was brought into the picture, it all made more sense, with Rarity and Knock Out getting along and Ratchet being the grumpy old man. I was surprised to see Knock Out be portrayed (or strongly implied) as being in a gay relationship with Breakdown, and I liked how supportive Rarity was of it. 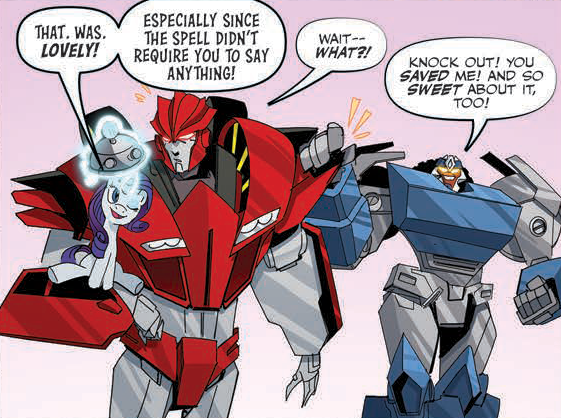 Knock Out showing off the parts of Cybertron that aren't just a city but instead look semi-natural was interesting; I wonder if this is a thing in the normal Transformers lore, or if it was made up for here. The art was good, though the bit where Ratchet assembles a gadget and Knock Out uses it before it's ready was a bit confusing. It was pretty neat seeing Rarity be the one to expose how magic and Cybertronian technology can interact. 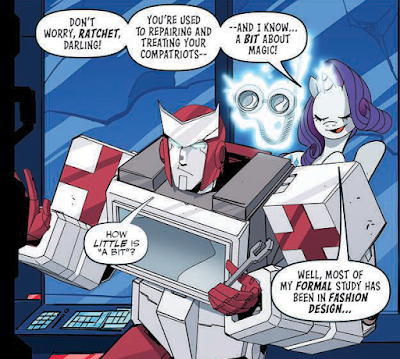 Silver Quill's review mentions that Tony Fleecs both drew and wrote the first story, which is interesting. He doesn't really bring up anything else of note.

Next issue is the end of this mini-series, and likely the end of MLP/Transformers crossovers for a while, as G4 comics are winding down.
Top

Friendship is Magic #99
Marble is accepted to a rock school in Abyssinia—moreover, one on a remote island that only has boats to and from there in the summer—and Pinkie can't bring herself to plan her going away party. The synopsis emphasized Cheese's role, but much more of the issue is focused on Pinkie than I expected. Applejack plays a pretty decent role too. 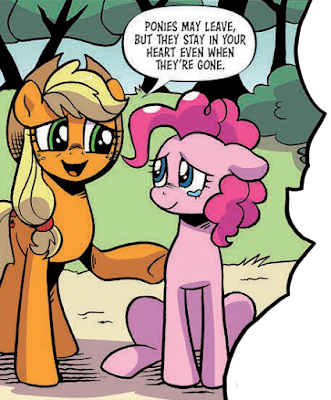 The story is really sweet, featuring nice emotional moments between all the involved characters. Marble leaving Equestria to go to an Abyssinian school is a really neat bit of cultural exchange that I would have liked to have seen a lot more of in the comics. Adventuring is good and all, but give me slice of life stories set in other regions!

The art is by a first time MLP artist, as indicated by an interview at the end, and she did a really good job. The ponies look adorable and there are a lot of fun expressions. This includes a set of new (but nonspeaking) characters, Pinkie's cousins!

Silver Quill's review is also very positive. Also, I didn't notice until seeing his screencap that Mudbriar is miscolored. 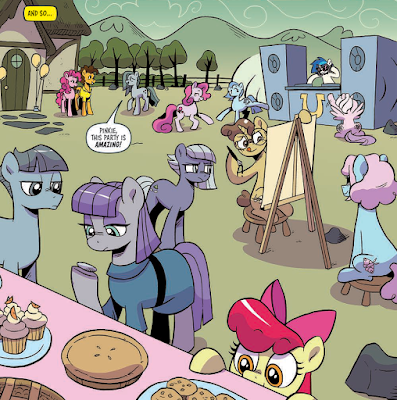 This is the final "slice of life" story of G4, with the remaining issues all being focused on the Harmony storyline, and it's a great sendoff.
Top

Friendship is Magic #100
In this 100th issue, we visit the land of the birds, Captain Celaeno's homeland, Ornithia. A bit of an odd subject for a milestone issue, but with the increase in pages, and manages to tell a pretty good story. 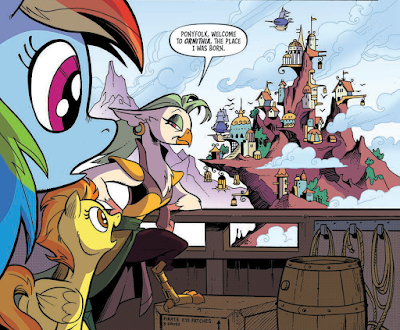 Interestingly, the art was a collaborative effort of multiple artists. Overall, the issue looks great throughout. Ornithia is a nice colorful, if not entirely unique-looking, setting. The new focus characters are pretty nice looking. I especially liked the crow design. 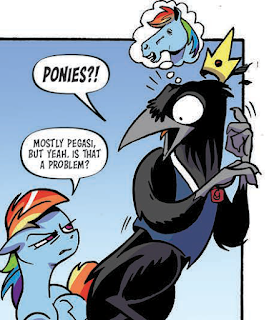 Compared to the other Tree stories, we only really see one other Element bearer, which definitely works better for this issue. And hey, it turns out Celaeno is saphhic! Though I wished they leaned into the pirate saving a princess thing more for that.

This story finally introduces the Knights of Harmony, and the true natures of the trees we've seen. The other trees not being based on Friendship, and the Tree of Harmony not being connected to the light systems we saw, is a pretty interesting way to recontextualize previous stories, though I'd have to see how well it really works. Given they specifically had Starswirl show up to say that in all his journeys (including Reflections!) he never found any indication these other trees existed, I wonder if there's some twist with what we learned about the Knights.

Here are the covers. That last comic cover, with all the comic-specific characters and moments, really makes me sad that more than anything else FiM, we'll never really see them again.

Silver Quill's review reminded me of the racial structure shown in Ornithia, with parrots being considered lesser. I was surprised that wasn't resolved by the end. I assume we'll see more of this place in the coming issues. 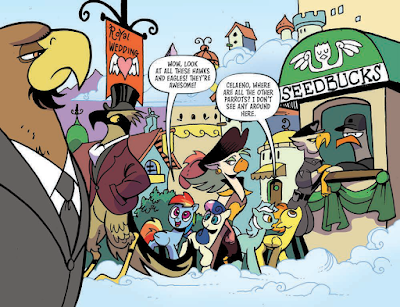 There were also a bunch of subplots I neglected to mention, including Lyra and Bon Bon's sneaking. It was a pretty nice showcase of them. Plus there's the moment where everyone is put on a crashing ship! I have to say, it's pretty weird seeing Celaeno fly with her wings. Spitfire, unfortunately, doesn't get much to do as part of this team.

And then there's Katie Cook's one-page story at the end, which is really cute.

Overall, while this is a good issue, more than anything, it makes we wish we got a lot more time with the comic. 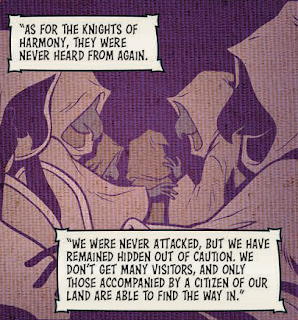 My Little Pony / Transformers II: The Magic of Cybertron #4 (FINAL)
With the end of this miniseries, we're one step closer to not having any MLP G4 comics at all. In any case, this goes out with a bang, with a good dragon showcase at the start, and some insanity in the second half that I hesitate to spoil. 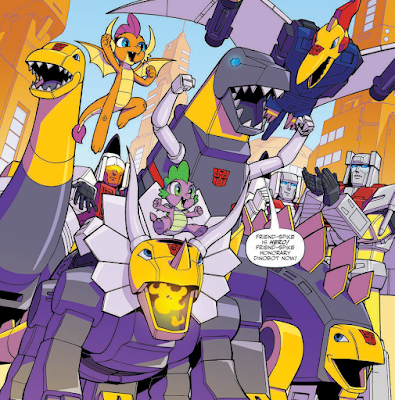 The first story features Spike and Smolder interacting with the Dinobots, then fighting off a combiner. I suppose there are only so many threats to the Dinobots, but having a combiner again felt weirdly repetitive. That said, we got some nice bits with Smolder, and Spike got to save the day with his Transformers geekiness. We had gags before of the Transformers becoming MLP fans, but it's neat to see Spike become a Transformers expert. The Dinobots themselves didn't get to do much, alas. The art for Spike and Smolder was really good. The Transformers art was also really good, but it was weird seeing the Dinobots other than Grimlock with irises and pupils.

The second story resolves everything, making use of Ratchet and Rarity's discovery of how magic and Cybertronian technology can interact. The form this takes is pretty ridiculous, and I'd rather not spoil it. I will say it's a shame that Fluttershy didn't get in on it. 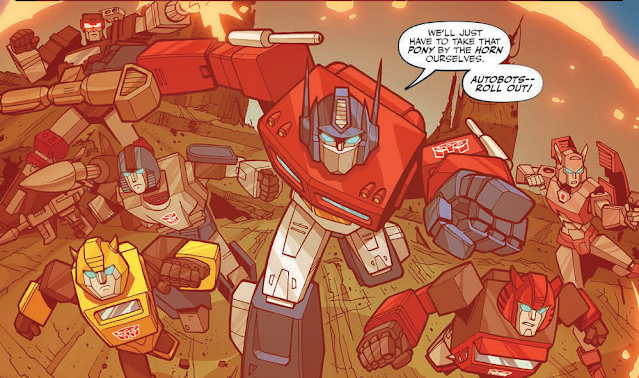 When Sombra was digging up a buried Transformer and everyone was worried, I assumed it'd be Unicron, but instead it was Scorponok, who I guess is a bigger deal than he was in Beast Wars now.

The resolution, with Megatron starting to maybe make amends with the Autobots, and being willing to allow more interactions with the ponies, was pretty interesting. With obviously out of continuity stories like this, it's an opportunity for developments like this, and it's neat to see. I was pretty surprised to see this end with another sequel hook. I definitely wouldn't mind seeing more.

Silver Quill's review points out Rarity's odd line that it's only been twenty minutes since Twilight was brainwashed, which is an insane timeframe no matter how you slice it. I have to imagine there was some mix up when laying things out for the writers.

October comic solicitation. It's weird not seeing FiM included. Also, I suppose this confirms we aren't getting a G5 comic as of yet. 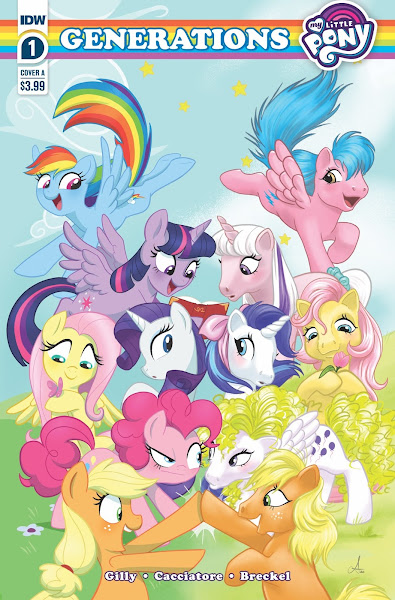 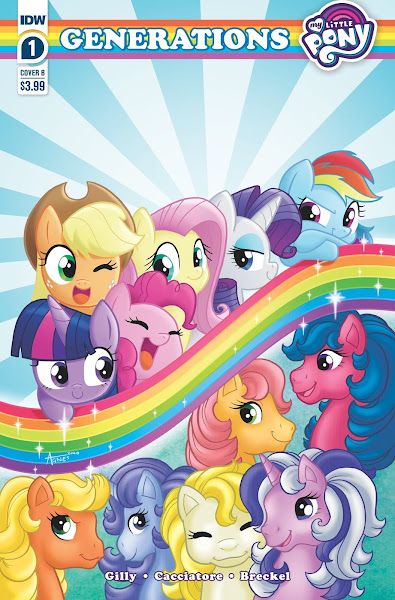 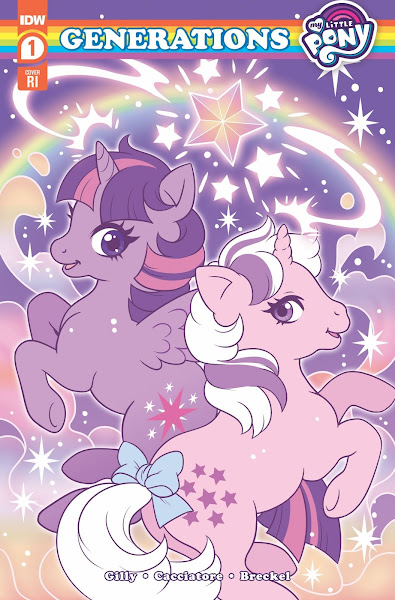 A brand-new Pony adventure begins here, encompassing generations both old and new when G1 and Friendship is Magic collide!

A long time ago, an evil witch named Hydia sought to destroy pony-kind. Now her granddaughters, Grackle and Dyre, are back to finish the job!

With the School of Friendship overloaded with students, Starlight Glimmer and the Mane Six reach out for help. Enter: Violet Shiver, Shadow Storm, and Black Belle! But these ponies aren't quite what they seem; in fact, they're working for Grackle and Dyre! With their sights set on revenge and a brand-new Smooze on hand, the young witches and their dastardly creations are ready to cause some mayhem...

Looks like this follows the premise of G1 characters already existing in the G4 universe. I wonder if the witches will be humans, and if they'll explain that.
Top

Friendship is Magic #101
Here it is, the penultimate issue. I actually forgot about that fact when I was reading, and was wondering, were there two or three issues after this one? Turns out the answer is one.

I reiterate that I really wish this Knights of Harmony story had room to breathe. Introducing five new villains (plus one introduced just last issue), all with unique powers, and having them be defeated next issue (the final one of the series) just doesn't work. 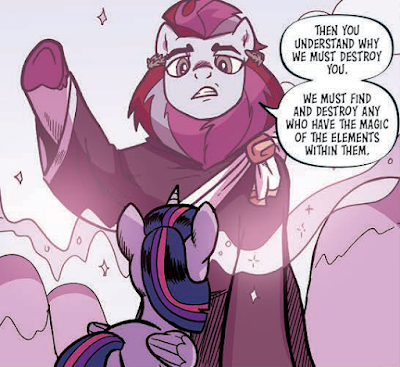 As is, the Knights of Harmony are nothing more than random tough guys introduced late with little characterization. There are things I could say about them, but they all come down to me wishing they had more issues. So many aspects are "oh, that's weird, is that going to be explored more?" with the answer "probably not because there's only one issue left". Also, one of them has the ability to change peoples' sizes. That's a unique power we haven't seen in FiM before! There could have been a 4-issue arc's worth of stuff to do right there, just focused on defeating this one Knight.

More than anything, I'm pretty disappointed that the final non-crossover story of G4 is going to be spent wrapping all this up. Even season 9 knew that the actual final episode was better spent focused on the characters rather than fighting a big threat, while I don't expect much more than a few pages spent on that in the final issue. 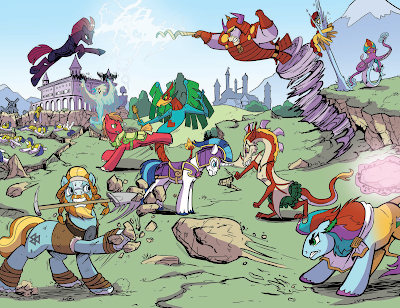 Silver Quill's review focuses on explaining the names and theming of the new villains rather than judging their qualities as characters, though he doesn't hide how unimpressed he is by their leader at least.
Top
Post Reply
168 posts