Related: I miss the Pinkie Pie from S1 who would burst randomly into song at the drop of a hat.

It was probably just too hard to keep writing her that way, but man, I could feel the effort that went into that version of her.

Hell, I still crack up laughing at the faces she makes in S1E01 at the party
Top

Eh, there are plenty of season 4+ songs that get stuck in my head. "Let the Rainbow Remind You", "Your Friends Are Always There For You", "Friendship Always Wins", "I Can Do It On My Own", "Best Friends Until the End of Time", "Flawless", plus Movie and EQG stuff.
Top

I think the only s4+ song that stuck with me is the Kirin song.
Top

There's plenty of good songs past S4, there's just a lot less of them. Probably because Ingram had to work on EQG too. It's a shame since the songs are one of my favourite parts of the show, but we still got a lot of good stuff. And yeah the movie was top notch.
Top

I do wish they kept making musical episodes. Maybe even an adventure episode that happened to be a musical.
Top

I guess Enterplay kept making those non-game trading cards for a while, but recently canceled Series 5. They put up an album of the whole set for us to peruse, though. It mostly focuses on Season 7 and 8 stuff, and doesn't really give any new details on any characters, but it's neat nonetheless.
Top

I don't know if people still care about this, but I was checking IMDB (which I don't think has all the info in regards to the show) to see who wrote the most episodes.

It looks like it's Josh Haber, who wrote or co-wrote 26 episodes (1 season's worth). He even wrote the final episode.

Meghan McCarthy has the second highest, with 18. Also, both writers have several episodes where they receive "story by" credit.

There has also been numerous writers who only did one episode:

More and more writers came and went towards the final seasons. I think Meghan was the only one to stay with the show throughout its entire run, and even then she was only in a producer role towards the end.

Voice outtakes for the show got leaked. Somebody compiled them into video below

Some of the outtakes are NSFW, so just a warning

After Lollipop Chainsaw it was time for the rest of the crew, other than Tara Strong, to get some naughty lines to the public (although not official).
"The knack of flying is learning how to throw yourself at the ground and miss." - Douglas Adams
Top

Shame, the video is already unavaible. Understandable, but still.

Well, here's one at least:

The voice actresses have always been one of the show's greatest treasures. This just cements that fact


Hasbro's been teasing this on Instagram the past few days, possibly related to the new line of toys that caused such a stir recently.

I started watching season 6 for the first time today! It probably would’ve been better to rewatch seasons 1-5 first because I don’t remember much of anything

SlateSlabrock wrote: ↑
Wed Aug 28, 2019 11:25 pm
So, now that the show's ending, season 3 is finally getting dubbed into Japanese via Disney's Dlife mobile streaming service, and I think it might also be on BS satellite? They also threw the first two seasons on Japanese Amazon Prime. Unfortunately, it doesn't look like anyone's recording it and torrenting it like they did for the earlier seasons.

Dlife is shutting down in March.

They're airing the recent Christmas special episode, but I don't know what that means for seasons 4-9 of pony in Japan.
Top

Dlife is shutting down in March.

They're airing the recent Christmas special episode, but I don't know what that means for seasons 4-9 of pony in Japan.

Best Gift Ever was dubbed? Interesting.

Anyway, I realized this means "Magical Mystery Cure" was dubbed by now.


More at the uploader's page.
Top

Haha. On one hand, the translation's kinda simple.

On the other hand, they never dubbed songs that Rarity sang in the first two seasons, so that's an upgrade.
Top

Huh, I guess season 4 is being dubbed in Japanese after all.
Top

Because of the cast change, we don't get to hear Belldandy sing this.
Top

All these years later and no matter the language Magical Mystery Cure is still so effing wonderful and good.
Top

Clip from Japanese "Best Gift Ever"!
... The singing here is pretty bad.

Checking in with the season 4 Japanese dub again.

In terms of sound, Cheese's Japanese VA isn't bad. Singing could use work, though.


OK, they changed Discord's Japanese VA too. It used to be the guy that played Buggy the Clown among tons of other roles. He had the perfect Japanese VA before, but the new guy sucks.


The first notes are the same as in English here, which is weird. Flutterguy's voice isn't great, and again a change from her season 1 dub voice (though her previous Flutterguy Japanese VA died I think so...). Her normal singing voice at the end is a breath of fresh air, autotuned as it is.


More at the uploader's page, through "Filli Vanilli".
Top

Andy Price is opening up commissions tomorrow. Know some of you like to collect pony art (or might want something else) so I thought I would share.

So a brand new FiM episode came out on an Australian on-demand service! Sort of. It's a recap episode, but there's about five minutes of new scenes. I went ahead and put them online; each part is less than a minute, because otherwise the copyright bots get upset. I put them in a playlist.

In these five minutes, we manage to get a surprising number of cute moments, particularly interactions between Rarity and Twilight. 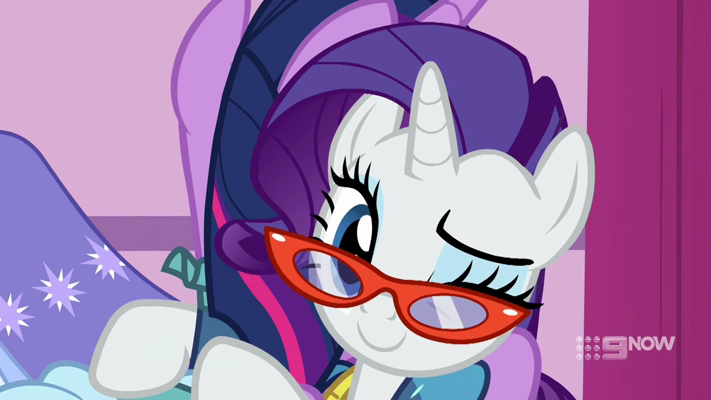 Next recap episode, with recaps stripped out.


This had a funnier framing device, though there was less tearful hugging.
Top

Next recap episode is here, "Memnagerie". The framing device isn't too eventful, and I'm not a huge fan of Fluttershy pretending the need help just so Twilight would reminisce with her. Still, it's fun enough.
Top

Thanks for posting these so far. It's enough to make me wish these had actually aired in the lead-up to the finale.

Next recap episode is here, "Deep Tissue Memories", with Rainbow Dash. The framing segments had a surprising number of what I assume are new assets, and Twilight's spa treatment looked pretty nice. Also, Twilight says she loves Rainbow Dash and Rainbow says she loves her too.
Top

What I am now

I think it's pretty well established that it's against the law in equestria to not love anyone.
Thicc like molasses thx 4 askin


It's a pretty eh episode, both in terms of the framing device and the chosen recaps.

Applejack's so dumb that she can't talk to Twilight without telling her about Starlight's book plans unless Spike stops her.

Confirmed that the barn used from season 4+ is in fact the barn from "Raise This Barn".

I think the weirdest recap inclusion has to be the moment where Chrysalis reveals herself in "A Canterlot Wedding" and Applejack apologizes to Twilight for not believing her.

Stripping out the recaps, there are only four minutes and 30 seconds of new scenes, less than every other character so far.

I thought the new content was pretty good in this one, but then again AJ is my favorite Mane 6 pony.

This won't surprise anyone, but I liked the Chrissy recap, with that old reverberating voice.

And we have what is actually the final bit of FiM content, with "Memories and More". This covers Spike, Starlight, Celestia, and Luna.


I was surprised to see this was pretty light on new footage too. Since they split up Spike hatching and the rest of the Twilight cutie mark flashback into separate flashbacks, there was even a few seconds of repeated old footage. We do get a scene taking place after the last "present day" moment in "The Last Problem", which is nice. The final scene is "Best Friends Until the End of Time", but with the Trixie and Starlight scenes cut out, which really is a pretty good way to end.
Top

So hey, I'm in the middle of finally catching up on season 9, and I was wondering when was the best time to watch Rainbow Roadtrip? In the same order it aired, right after episode 13?
Avatar source
Top

Anytime before the end of the show is probably fine. I don't remember any continuity that would matter.
Top

Rainbow Roadtrip doesn't strongly tie into any of the show, and unlike how the movie took place between seasons 7 and 8, the show never references it. I think it could've fit in pretty much any time from S4 forward.

Rainbow Roadtrip had a weird, almost "Good G3" vibe to it, if that makes sense. Just the main characters showing up and helping solve these random people in a very friendly way. Like, there was no character freaking out in a big over the top way, no super evil villain, seemingly low stakes beyond the town just being sad and maybe everyone moving away eventually. But I enjoyed it for what it was.
Top

On a random bed spread, we got what's probably our first look at the G5 characters!
https://www.equestriadaily.com/2021/02/ ... s-off.html 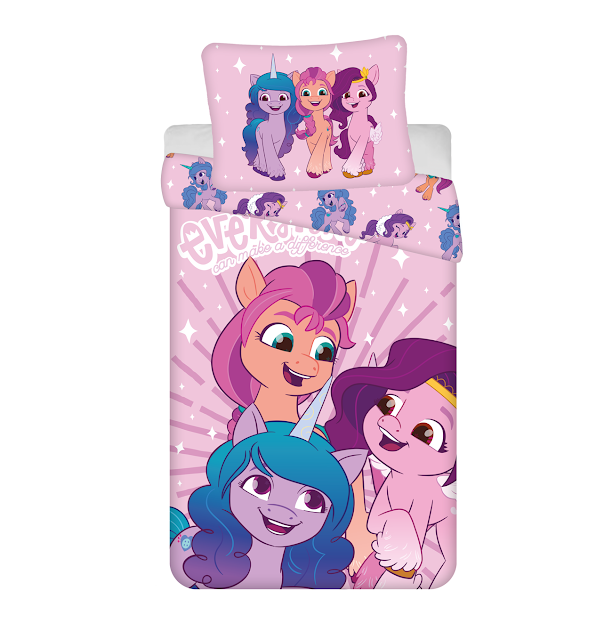 Disclaimer that the early G4 vectors didn't reflect the art style well, so this probably doesn't either, but this does remind me of Filly Funtasia's art style. FF's art style isn't actually bad, IMO, so not a complaint.

Hasbro has an investor event on the 25th, so hopefully we'll learn about them later.

And I guess bronies were thirsting for new ponies, because there was a ton of new art just for these bedspreads.
Last edited by SigmasonicX on Wed Feb 24, 2021 4:45 pm, edited 1 time in total.
Top
Post Reply
324 posts