LYAT is the cool place to hang out. You can find most of the cool people there. In LYAT you can just chill and do whatever and totally relax. "Take it easy" is the LYAT motto, for example, that's how laid back it is there. Show up if you want to have a good time. Another good reason to show up is if you want to hang out with friends.
Locked
8 posts • Page 1 of 1

My Little Pony: Friendship is Magic is a new cartoon from Hasbro, revolving around the--

Despite the extremely girly name, saturation of pinks in the color scheme, and legacy attachments to the 80's, this cartoon is GOOD. Sit down, and I'll tell you why.

Okay, why should I watch this?

It's directed, produced, and overseen by Lauren Faust, wife of Craig McCracken. You might know her better from work such as The Powerpuff Girls and Foster's Home for Imaginary Friends. This is a woman who A. knows what she's doing, and B. doesn't go for the old "let's throw tea parties and defeat villains by sharing" bullshit.

And this shows though, STRONGLY, in Friendship is Magic. It feels much more like the Powerpuff Girls than any previous MLP cartoons-- the writing is clever and snappy, the humor is surprisingly witty, the voice acting is top-notch, the characters are distinct and likable, and in every episode there’s at least one joke or reference which was clearly put in more for the adults watching than the kids.

Oh, and the art is damned good too.

I don’t believe you. A My Little Pony cartoon that doesn’t rot your teeth?

I know! But this thing is on FIRE. Despite a rather unfortunate timeslot it's found a wide and devoted audience already, and is quickly shedding the old albatross of girl's cartoons past. A good chunk of that audience, surprisingly, is also male, and in the 20-35 demographic--though most of those would probably never admit to watching it, at least not in public.

Well, tell me more, I guess. Maybe name some characters? 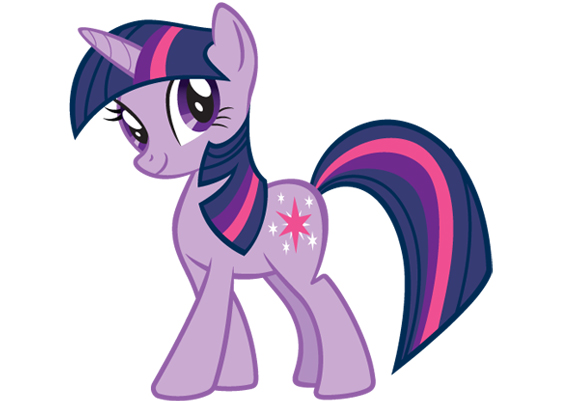 Twilight Sparkle: The de facto leader of our central cast. A unicorn who’s extremely book smart and good at magic, but is a bit new to this “social life” thing. She’s been assigned by her boss, Princess Celestia, to study the “magic of friendship” in Ponyville, which is the excuse for the plots-of-the-week and the Mork Calling Orson bits at the end of each episode. 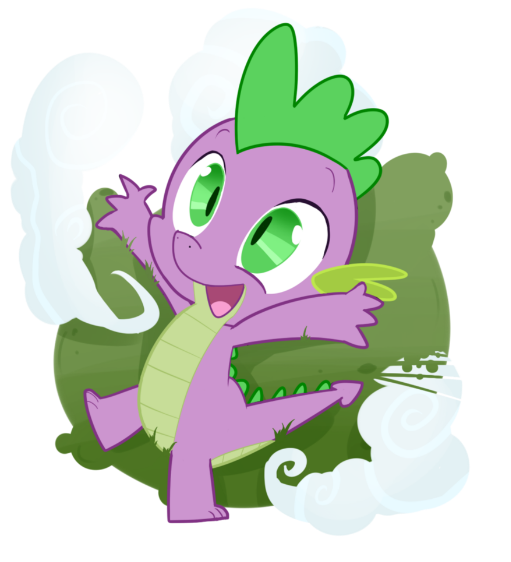 Spike: Twilight’s assistant/friend/baby dragon/personal mail system. Though he’s supposed to be helping Twilight study magic, his job is mostly to provide snark. He’s also one of only two legacy characters in the series, thanks to Hasbro losing the licenses to the old ponies. The other one is... 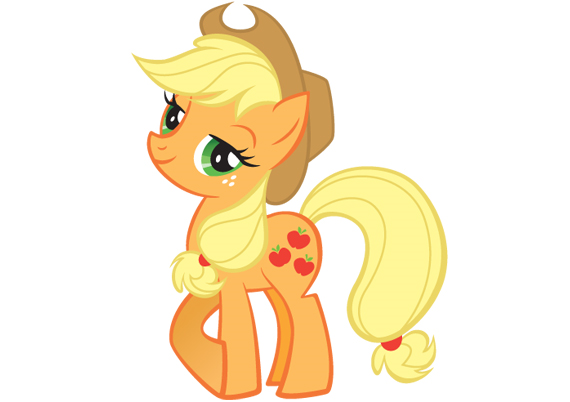 Applejack: An earth pony who is proprietor and operator of Sweet Apple Acres, an orchard outside of town. Applejack is stubborn, blunt, and not much given to subtlety, but she’s also honest, reliable, and as faithful a friend as you could ask for. 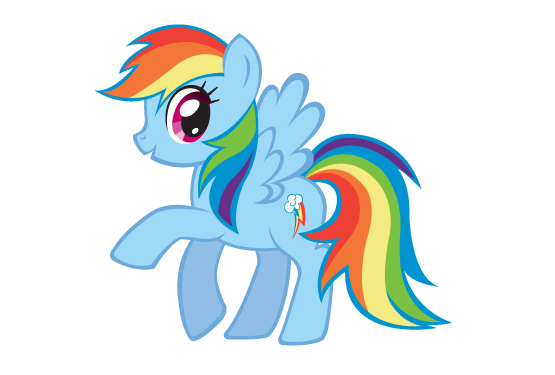 Rainbow Dash: A pegasus pony who LOVES to fly--preferably fast, and flashy. Rainbow Dash is in charge of keeping Ponyville’s weather under control, and though she’s a bit proud and insensitive at times, she cares deeply for her friends, and would never leave them--except maybe in her dust. 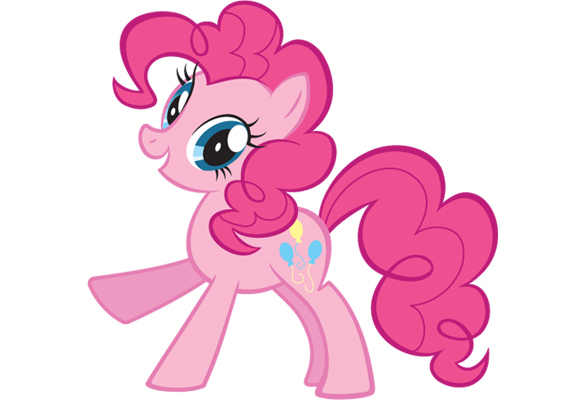 Pinkie Pie: Pinkie Pie is an earth pony who is the living embodiment of a sugar rush. She loves to party, and celebration seems to follow her like a wake behind a ship. If she has an off button, it hasn’t been found yet--but though she can be a bit irritating, she’s always a joy to have around. 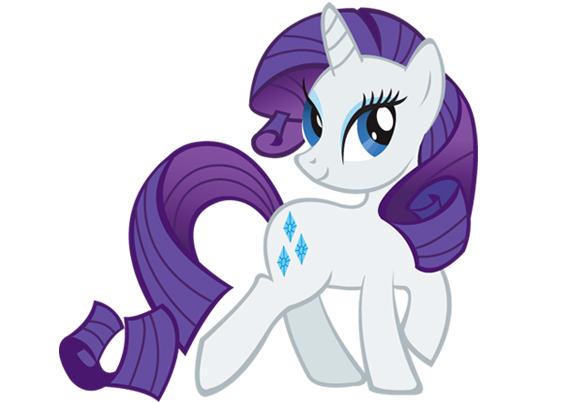 Rarity: Rarity is a unicorn who is all about the fashion. She runs a fashion shop of her own in Ponyville, and is quite the artiste. She’s somewhat posh and a bit of a perfectionist, which can lead to her clashing with the down-to-earth Applejack, but if her friends or town need her, Rarity always pulls through. 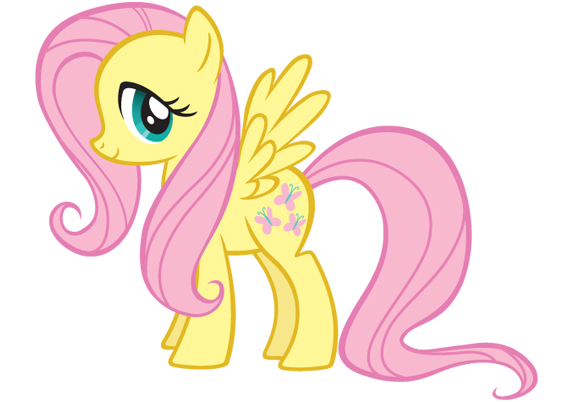 Fluttershy: Fluttershy is a pegasus pony who is quite literally scared of her own shadow. She’s timid, quiet, and, well, shy, which makes her ideal for her job of working with animals, but despite her own fears she’s always willing to help out, providing that little bit of kindness wherever it’s needed.

Together they get into hi-jinx, laugh, cry, squabble, and save the world once or twice. Just like any other group of friends, huh?

Huh. All right, all right, I’ll give it a shot. You said this was on when?

The show airs on Fridays at 10:30 AM and 1:30 PM on the Hub, which is a basic satellite/digital cable channel which replaced Discovery Kids (channel listing finder below). I wasn't kidding when I said it had an unfortunate timeslot.

There are twenty-six episodes lined up for the current season, twelve of which have aired, with a second season already on order.

Buuut, as many kids won’t be able to catch it on there and the Hub website takes down the episodes it puts up rather quickly, the creator has voiced unofficial approval for Youtube postings of the show (by linking to them from her DeviantArt).

So forget everything you knew, and give up your childish things--it’s time for some ponies!
Top

You are a pedophile.
Top

What I am now

Ponies are banned on this forum, you're all getting banned.
Top

The last thread wasn't that terrible, was it? I'm mean, beyond the billions of 20somethings watching a show for little girls? We mostly steered(ha) clear of the creepy shit.

Willsun wrote:The last thread wasn't that terrible, was it? I'm mean, beyond the billions of 20somethings watching a show for little girls? We mostly steered(ha) clear of the creepy shit.

Gaze into the Abyss, until the Abyss awkwardly comes up with a reason to leave.

i miss the good old days of talking about nothing but avatars for 30 pages straights. things were so much better back then

Return to “LYAT: Love You and Tolerate”