Come on in, come to the place where fun never ends. (Shenanigans!)

i'm not a furry i'm a fluffy
Top

I’m sorry if this is TMI

also, it happens outside of furry circles, too
Top

it's fine, no worries

Yeah, I've had my share of people I don't know DM'ing me out of the blue asking if I want to RP (I even had someone mass-DM'ing me if I want to RP for "charity", whatever that means). Instablock, needless to say.

And you're fine, Madeline!

Perrydotto wrote: ↑
Thu Nov 07, 2019 2:12 am
as so often with fandoms, finding cool and chill people to hang out with makes the experience 10000% better so you can avoid the bad shit at large 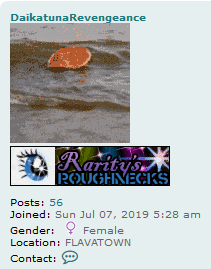 I found the cute furry

I apologize for being mean and hurting someone’s feelings.
Top

Huh? I don't think you hurt anyone with what you had previously posted.

Someone PMd me to let me k ow I was kink shaming people and being hurtful, and moreover, that I have a pattern and history of doing this.

I had to apologize. I’m a garbage person.
Top

first of all, saying that you're uncomfortable when someone flies into your dms on twitter and tries to rp without your consent is not kinkshaming
Last edited by DaikatunaRevengeance on Sat Nov 09, 2019 10:40 am, edited 2 times in total.

I don't think you were disrespectful, though? It was a valid feeling.

It was about my diaper fur comparison. I don’t want to hurt anybody and someone was hurt that I compared it to pedophilia, which was a messed-up thing for me to do.
Top

Somewhat agree, but you're alright.

Now if someone had made a thread called "Y'all babyfurs", they'd probably have a 2% accuracy rate and it would be considered fighting words and slander.

It's 100% valid to not want someone to tell you about their kink in detail, or to ask that they not hit you up with unsolicited RP requests, and to block them if they do so after you've clearly indicated your aversion (either actively or passively).

On the other hand, making uncalled-for normative statements or value judgments about someone else's kinks is no bueno.

Exception: If someone's kink, itself, was to make unsolicited, inappropriate, actually-nonconsensual RP requests of people, the equivalent of a public flasher or groper type who gets their rocks off by doing inappropriate things and enjoying people's reactions, then you'd be justified in making a public complaint about it despite also being, unavoidably, kinkshaming.

(But said person would, at least in my book, still be able to solicit consensual RP about their characters having such interactions... and so on down the rabbit hole.)
Top
Post Reply
65 posts