So before we had a thread for animal crossing new leaf, where we can swap Nintendo codes etc and hang out.

Right before the forum died I had posted about the mobile phone game: Pocket Camp.

It's not set for world release for a bit, but it's available in Australia. And that means the apk is out.

It's definitely not like new leaf cuz you make yourself a rv and stuff... And the loan is not to Tom Nook, but some crow brothers etc
My Paypal if you want: [email protected]
Ko-fi: https://ko-fi.com/sailoryue
Devart: http://sailoryue.deviantart.com Tumblr: http://sailoryue.tumblr.com

Who put sparkles all around me?

i have acquired de bess dress 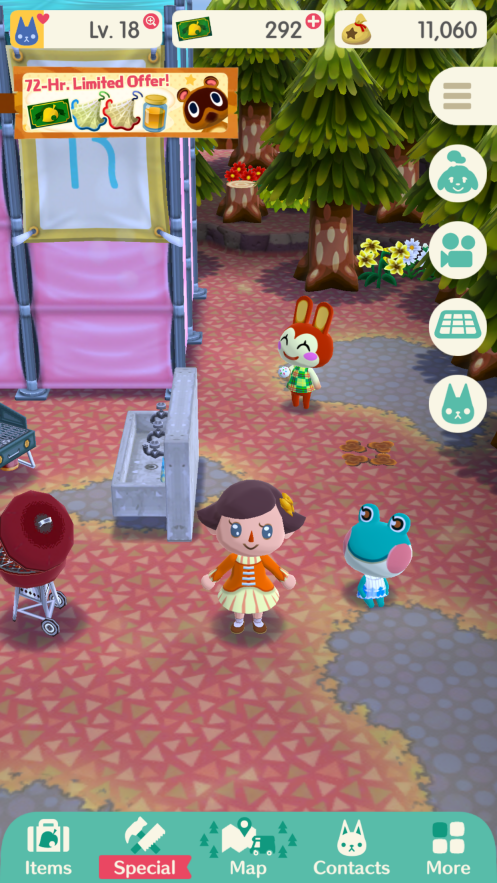 Does this game ever stop lagging out? I mean, I know "launch rush" and all that, but c'mon, man. I just want to meet new friends and decorate my camp.

it's been hell on and off, yeah. as of right now it's working good tho

here's a less-than-obvious tip: for whatever reason, inviting a new camper refreshes your ability to chat with everyone at camp for free items/friendship points. so before inviting someone to your camp, make sure you've talked to everyone who's already there first. this happens even if there is no room for the new camper to stay there

My first day in the game, and I've already gotten a friend request from a total stranger despite not listing my friend code anywhere (in fact, I haven't even looked up what it is). Unless this "Becca" person is someone you know, Jill?
Top

Pocket wrote: ↑
Fri Nov 24, 2017 2:08 am
My first day in the game, and I've already gotten a friend request from a total stranger despite not listing my friend code anywhere (in fact, I haven't even looked up what it is). Unless this "Becca" person is someone you know, Jill?

nope. your character will just randomly show up in other people's campsites and they can see your market box, visit your camp, or send a friend request from there
Top

Yep, often if you are on one of the farming zones (bugs, fish etc) you'll just stand there idle and people can friend request you. It's useful because even foreign people or: with Japanese/Chinese/Russian characters etc, if they play the game often you have better chance getting into the mine for free
My Paypal if you want: [email protected]
Ko-fi: https://ko-fi.com/sailoryue
Devart: http://sailoryue.deviantart.com Tumblr: http://sailoryue.tumblr.com

I'm kinda sad you can't have more than 8at the campsite but I guess that's typical for AC.....
My Paypal if you want: [email protected]
Ko-fi: https://ko-fi.com/sailoryue
Devart: http://sailoryue.deviantart.com Tumblr: http://sailoryue.tumblr.com

Is there any way to get me access to that campsite? I want to visit it and give it kudos every day.

Also, protip: I found out by accident that money trees still exist, so remember to shake those non-fruit trees.
Top

Why does this silly thing need to update its data from within the app itself? Is there like a size limit on patches that can be distributed through the app stores? Or is this just Old Man Nintendo not knowing how the Internet works again?
Top

Pocket wrote: ↑
Sun Dec 17, 2017 8:38 pm
Why does this silly thing need to update its data from within the app itself? Is there like a size limit on patches that can be distributed through the app stores? Or is this just Old Man Nintendo not knowing how the Internet works again?

this is something virtually every always-online mobile game does, and i think it's more convenient than opening the app only to be told you need to download a newer version to continue playing

even still, there are some updates they will push through the app store from time to time. this is probably because they changed a part of the app that can't patch itself, and it would also give them an opportunity redirect more server load to the app store going forward. for instance, if a game grows from 200 MB to 500 MB through in-app updates, their own servers will need to provide the last 300 MB every time someone installs the game, but once they push a major update through the app store they can include the whole 500 MB and let the app store handle it
Top

Something weird happened to me today. The game was playing in fast-forward. Basically everything was happening at double speed.

It's definitely a good way to get the day's tasks done quickly.
Top

The Nintendo Direct video for New Horizons is out. I'm really impressed by how much more customization they're adding to the game, even up to the point of terraforming the island itself.

I like how the Nook Inc logo is just the Nintendo font.

Hair rendering got less ugly since the last video, I see

Custom patterns seem to be restricted to the same pathetic resolution they were in New Leaf, which is going to make them stand out like a particularly nasty sore thumb against the official ones now. Also still no mention of whether it'll even be possible to create them in-game. I was hoping for some kind of image import tool.

Getting knocked out by bees? I wonder how that's going to work.

I love how cheeky they're being by keeping the screen blacked out during the rescue scene while playing what we all know is Resetti's theme. Well, now we know what their role is in this game.

Houses that visibly expand from the outside when added onto, finally. I wonder if your animal friends can expand their houses now too, especially since they already have a way to upgrade from a tent to a house at some point.

Nintendo: *names its bird pilots Orville and Wilbur*
Disney: You'll be hearing from our lawyers in the morning

*sigh* They're stiiiiiill pushing the smartphone link nonsense. So now I guess you need a smartphone just to text chat in the sequel to a game that had it built in.

Ooh, scratch that earlier comment, I see villagers' homes with extra wings and front yards. Awesome! It always kind of depressed me that they were stuck in tiny houses with often little to no functional furniture.

Is the "kid with perpetual dangling snot" thing a common trope in Japan, or just a Nintendo thing? There was one in Wind Waker, and... I wanna say Ni No Kuni or some other Miazaki thing?

Damn that's a huge aquarium. I wonder if the museum will actually expand, physically, over time as well so it doesn't feel so empty at first.

"Finally, I'm sure many of you still have questions, hm? We have anticipated some specific ones." Ha, I bet you have. But I bet you won't be answering those particular ones.

Looks like events are going to be delivered via internet now instead of pre-programmed, which is weird as hell
Top

Pocket wrote: ↑
Thu Feb 20, 2020 11:34 pm
Custom patterns seem to be restricted to the same pathetic resolution they were in New Leaf, which is going to make them stand out like a particularly nasty sore thumb against the official ones now.

Update: I have now watched this in full HD, and it's clear that they run it through hq4x or something similar. I was wondering why the default flag had a low-poly circle. Now I'm wondering if all the patterns are just the previous ones run through that same filter.
Top

Here's a nice thing I saw on the Animal Crossing Twitter feed. New Horizons finally got rid of your appearance being determined by a meaningless-seeming series of questions at the beginning, and just lets you choose how you look instead. And you can change it at nearly any time after the beginning, too!

I always thought there was a really obvious missed opportunity with those questions, anyway: After you tell Rover your name, you can say whether you think it's "cool" or "cute", which he takes to mean that you're a boy or girl, respectively. And then you can either affirm or correct him. The obvious thing to do would be to give you a character that looks more gender-ambiguous if you had to correct him. Instead, that ends up being the one answer that's completely meaningless.
Top

Nintendo went all out with their PAX booth.

A couple more tidbits: New Horizons will have the option of using a more top-down camera angle similar to the first Animal Crossing game as well as the "rolling log" view that's been standard since Wild World.


This Japanese advertisement for the game implies that you can now make designs with transparency in them, so you won't have to reproduce a grass texture (and then replace it over the seasons) if you want that effect on what you draw. Skip ahead to 1:40 to see it.


There'll be a dropbox outside the store where you can put things you want to sell even if it's after closing time.

GameXplain got online play working and posted a quick preview of it. Nintendo has made in-game communication a lot easier between friends; for example, you can send messages to your best friends who are online, even if they're not on your island right then and there.

Trip report: I just got done with my first day on the island and it's really great. It's late, so I'll leave it at this: get this game.

By the way, my island (named Pomorum; I wonder just how deep a cut that name is

) has pears as its native fruit. I suppose exchanging fruits isn't quite as necessary as it used to be since you can pretty easily travel to random islands now, but I've saved some to share if anyone wants to visit.

I also picked a southern island when offered the choice in the beginning. I figure it'll make for a more interesting winter and summer.

I added you. Can I put your friend code in the stickied list in this subforum?

Thanks again for coming! 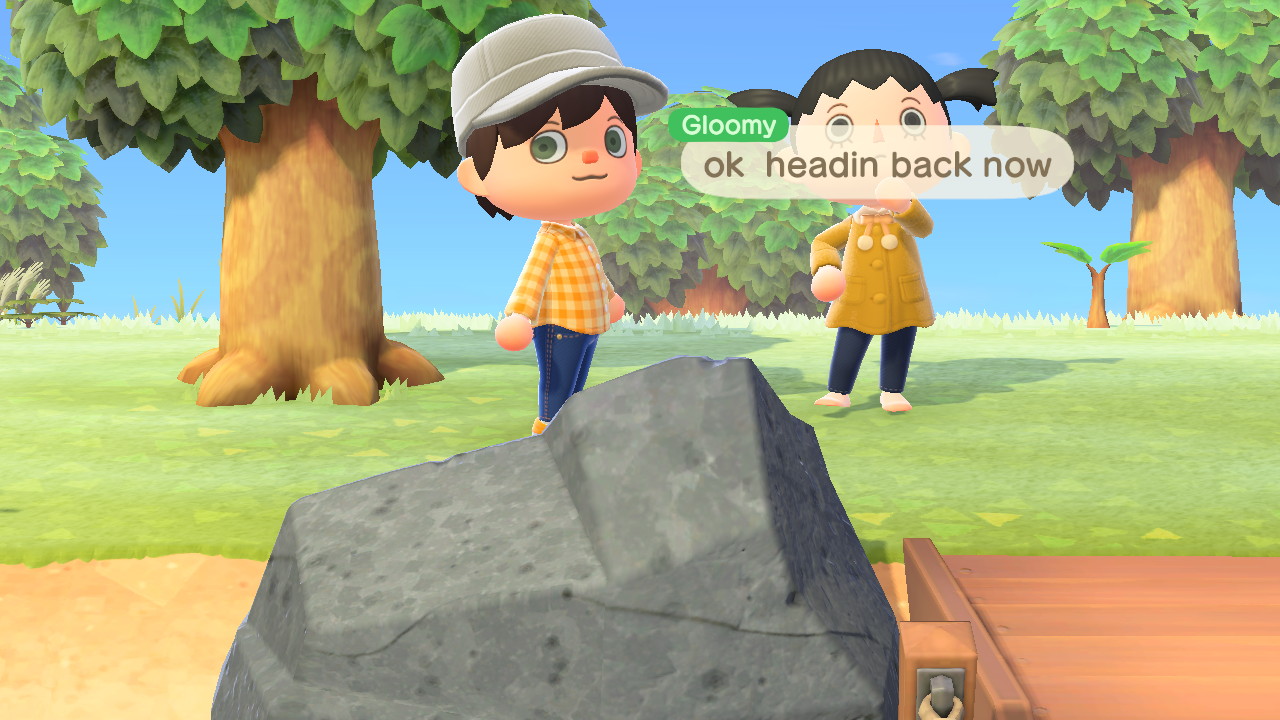 Perry visited as well. Somehow I managed to get this photo just as I was blinking.

I took some pics too but I don't have a way to get them on my computer, oh well