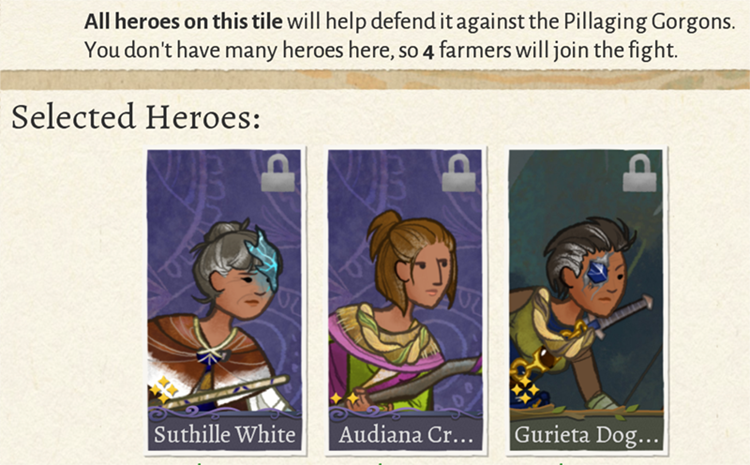 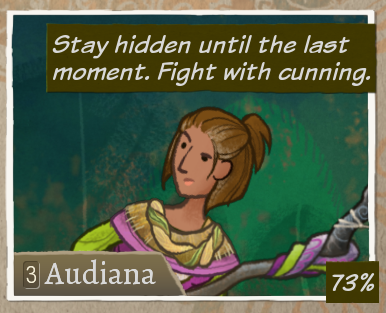 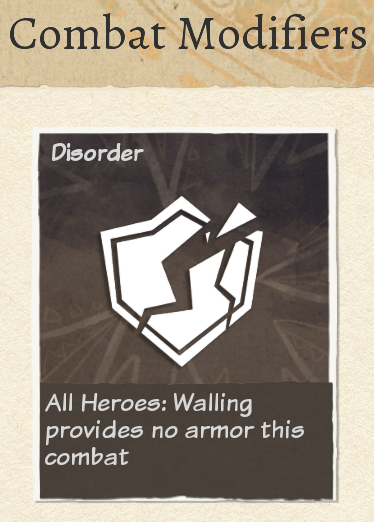 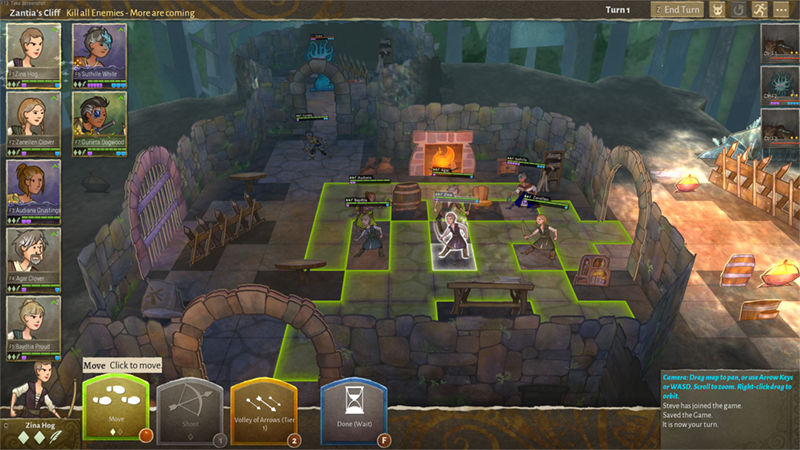 So here we are defending this mine alongside 4 villagers, all poorly equipped, and there's only one melee fighter among us and that's Baydtia with a pickaxe. Other than that it's 4 archers and 2 mystics, so the name of the game is to slow/pin the enemy as much as possible.

A new player on the Gorgon roster makes its debut -- the Staggron, which is what happens when a gorgonized deer completes its mutation. This creature likes to summon lesser Roes to annoy its human opponent. 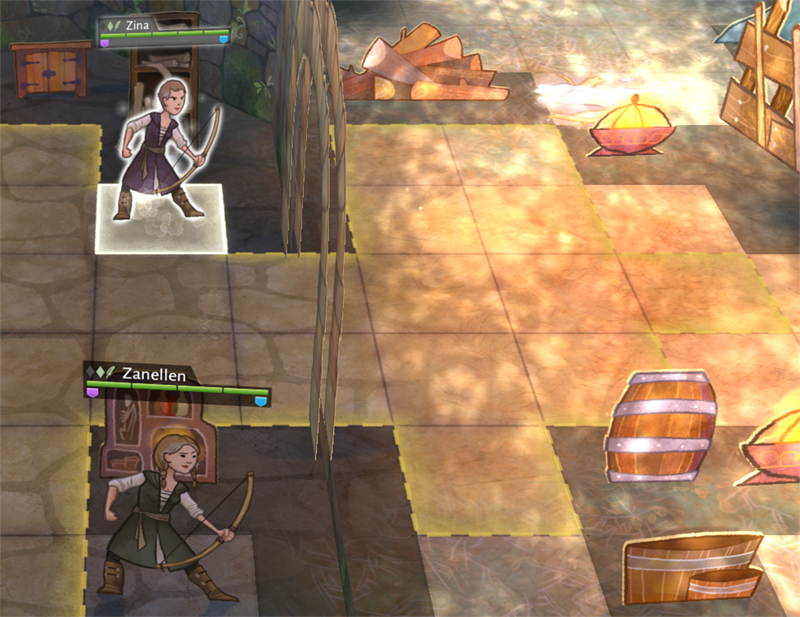 We start inside a building which will be our defense perimeter. Two archers stand watch at the east entrance; they won't be able to stop big foes but we need spotters to watch our flank. 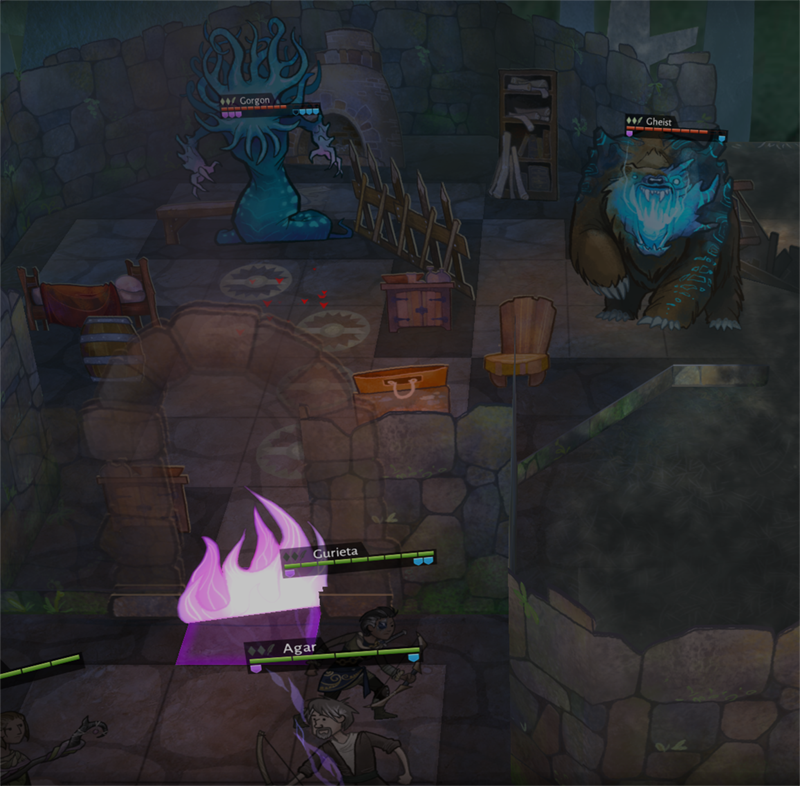 The immediate, and much bigger in every way, concern is the Gorgon and Gheist charging from the north. If they get inside we're in deep trouble.

To that end we shoot every arrow we have at them (Gurieta is the MVP in that regard, naturally) and to slow them further, Audiana uses a shattered urn to lay shard traps on the floor. If they get through that, then Suthille has lit a fire in the doorway. 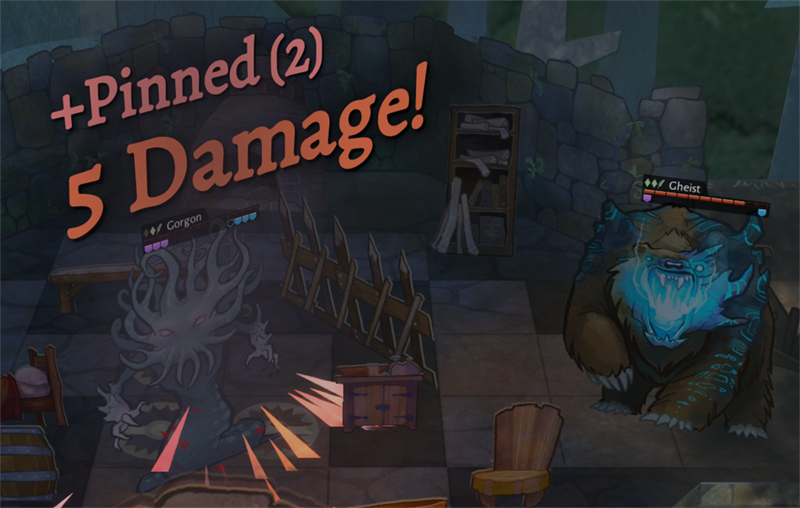 Amazingly for this bunch, the plan works as intended! The Gorgon oozes right into the trap and gets pinned, and our archers quickly finish it off. 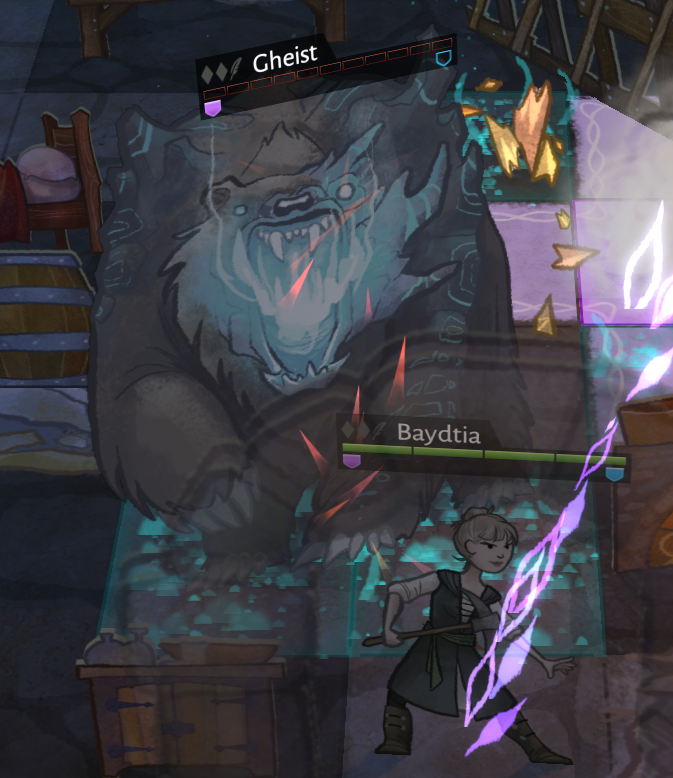 The Gheist follows behind, gets trapped as well, and is finally brought down with a pick to the face. No casualties so far! 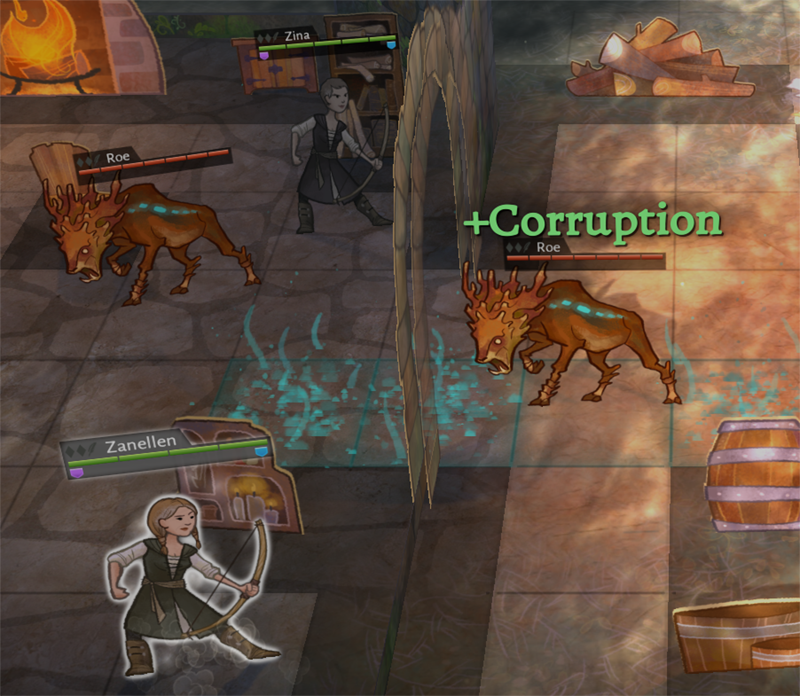 Just in time too, as we've got a perimeter breach! Roes move fast enough that they get inside before our archers have a chance to attack. Ranged overwatch is a thing in this game, but only for hunters with the appropriate skill, which these two people are not. They have a lot of gumption, though. 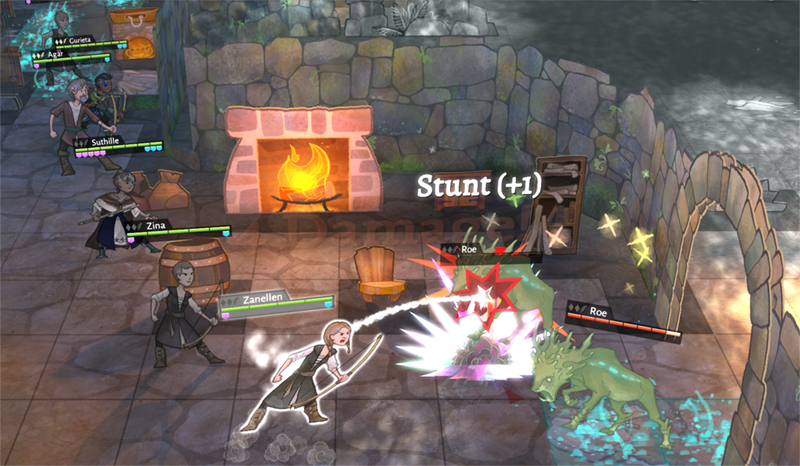 It's mutant deer season and everyone's coming down to help! 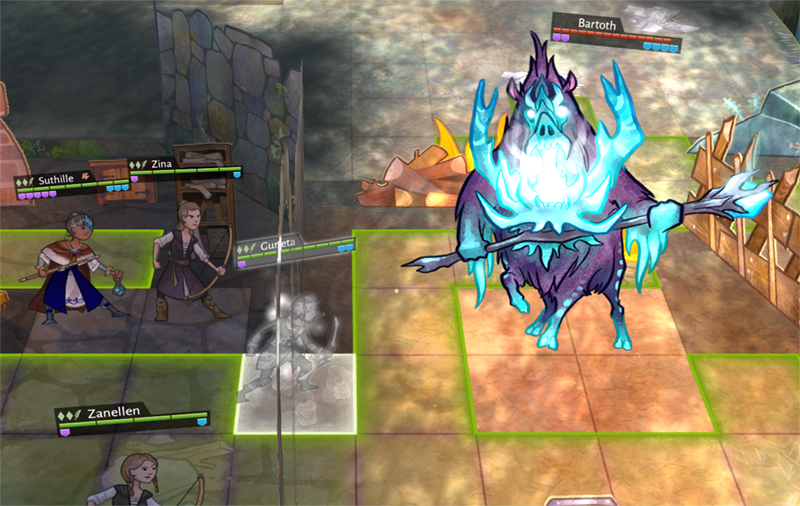 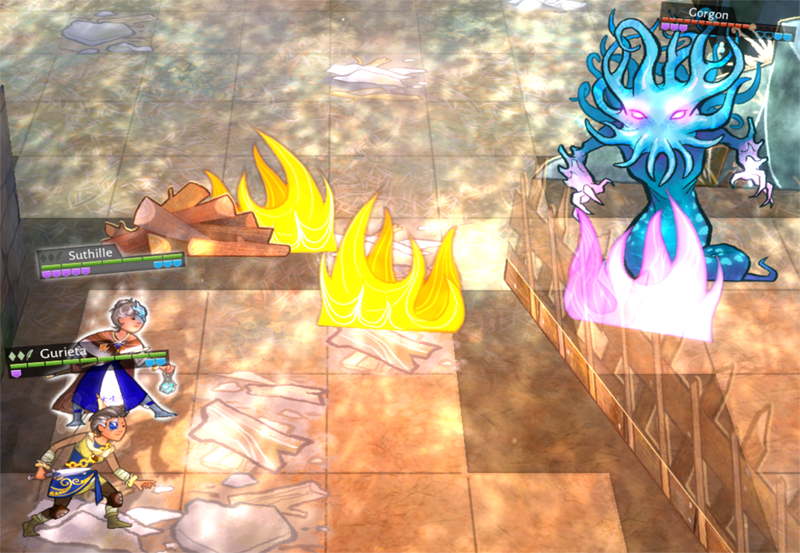 Even more so actual Gorgons. Suthille still bears a mark on her face from that one who tried to petrify her, some 30 years ago now.

And what's her favorite way to make them pay? 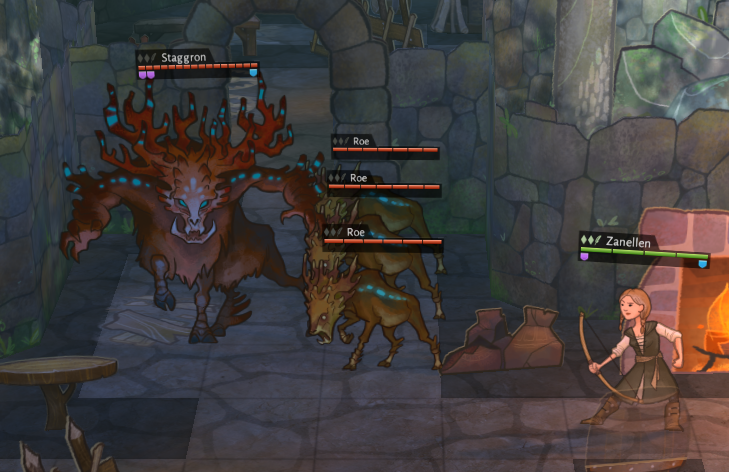 Peasant Zanellen makes a reconnaissance report: everything's fine up here except the giant mutant stag and its three henchdeer.

She retreats, only to be gored to death by a Rager coming the other way. 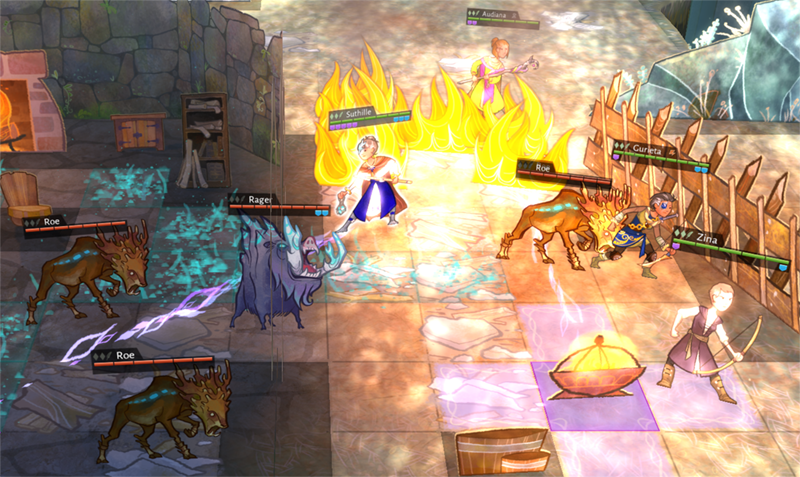 And soon the town square is a crazy mosh pit of hooves, tusks and fire. 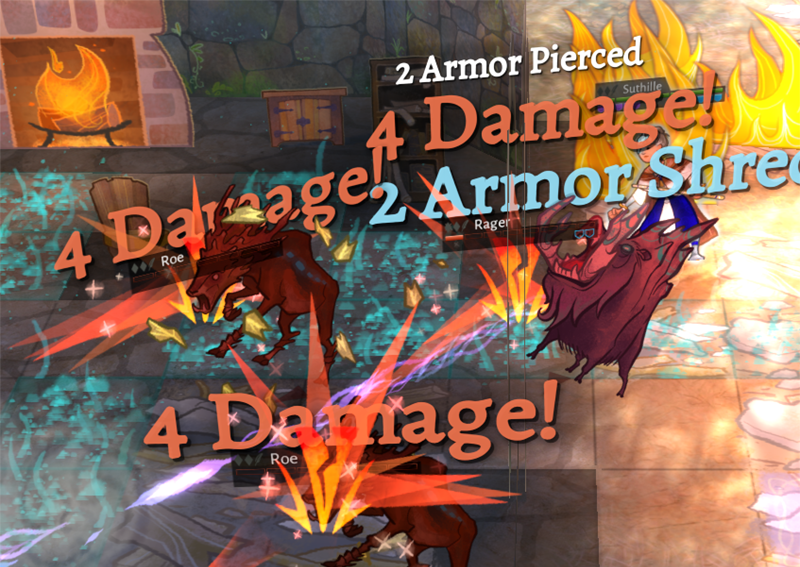 But do not meddle in the affairs of pyromaniacs who can explode tables with their minds.

Mr. Staggron is out of tricks now ... or is he? Suddenly, two frogs walk into a bar.

Bogmoors used to be scary, but against experienced heroes they're basically big ugly water balloons due to their lack of armor. 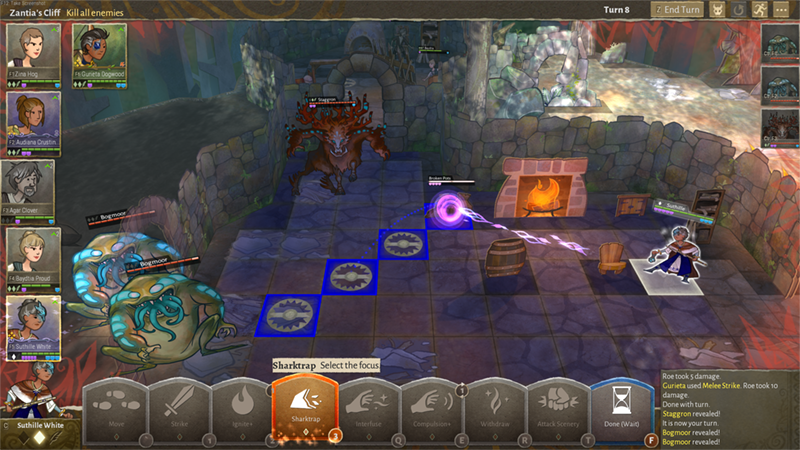 Here you go dummies, step on some broken pots for a while.

The townsfolk can take it from here. 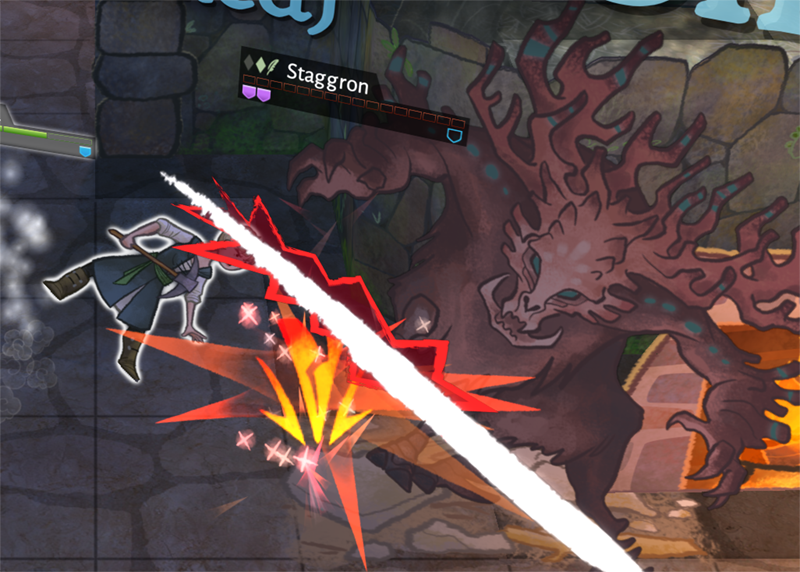 I'm so proud of them.

You do want to leave something for the younger folk once in a while, after all. 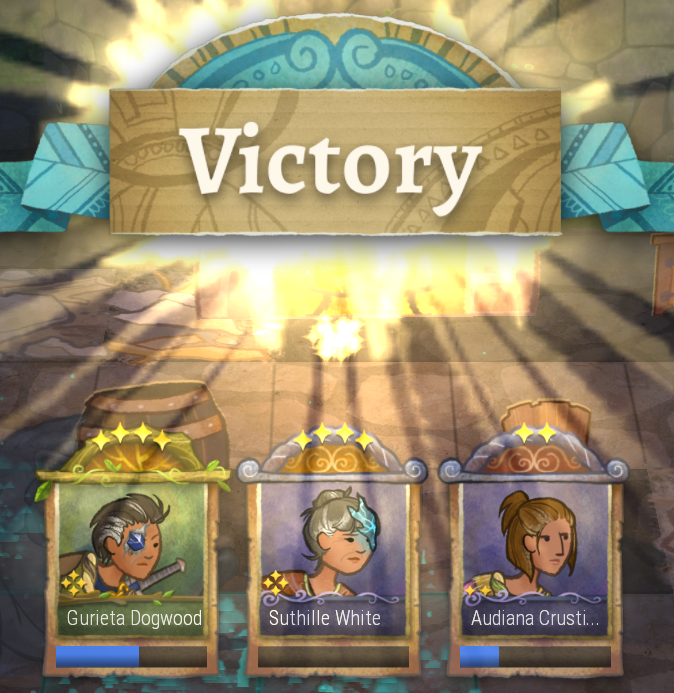 Graveroan is saved and I don't think the Gorgons will be able to assemble another army before we beat them. 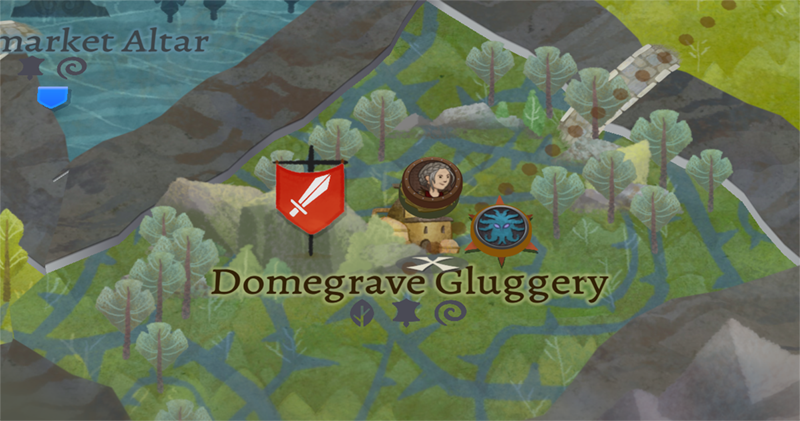 Not far away, Team Yovia and Team Thusette (by which I mean just Thusette) have finished digging their respective mountain passes, which will make travel much more efficient. Members of all three parties meet in the middle to put some hurt on the local Gorgons.

I almost feel bad for the monsters!

Just a normal day, adventuring with your moms.

As a kid, Willock used to spend time mountain-hiking with a friend. There's a panel where Yovia reminisces about that, but the screenshot didn't take. 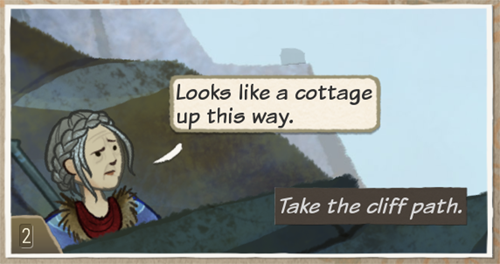 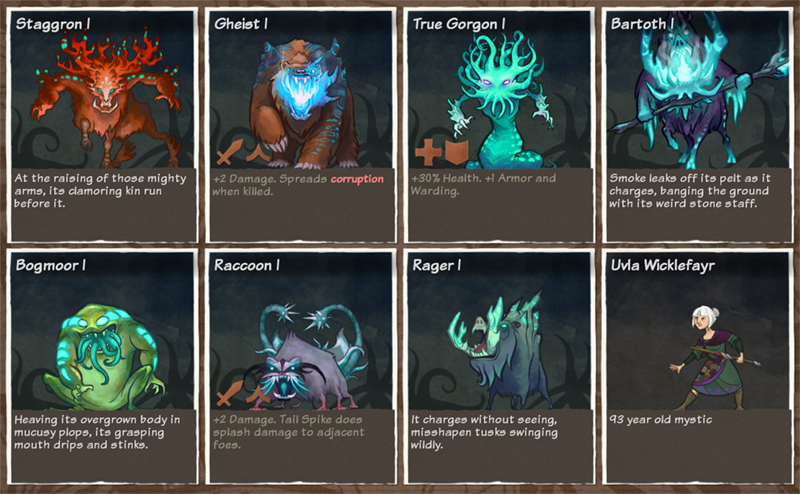