Guess who just got progesterone added to their regimen? THIS GIRL! 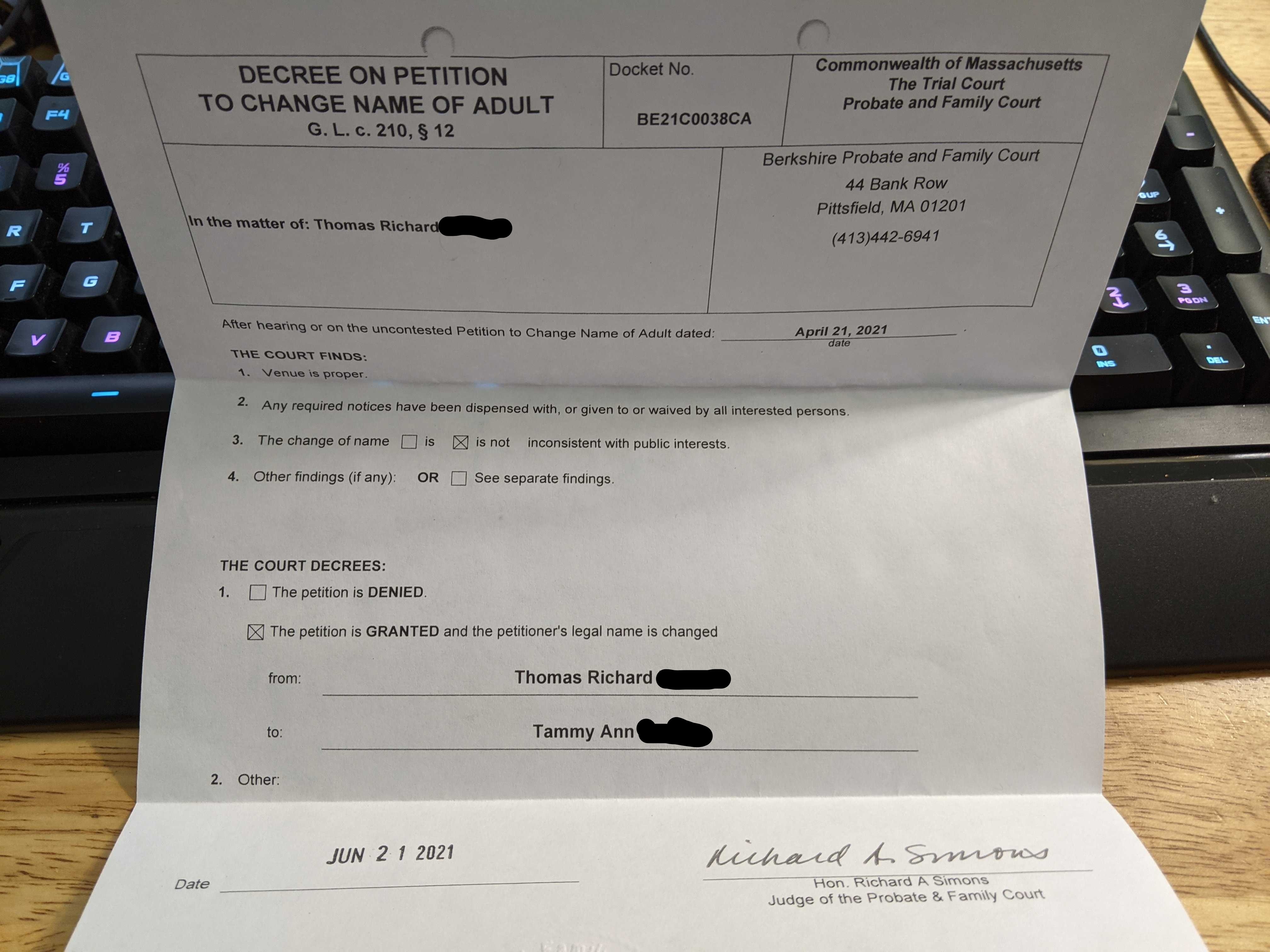 Approaching my 4th week of HRT

As of today, the only thing I need to change is my birth certificate. Name, SSN, and driver's license are all done!

Happy one year HRT anniversary to me! 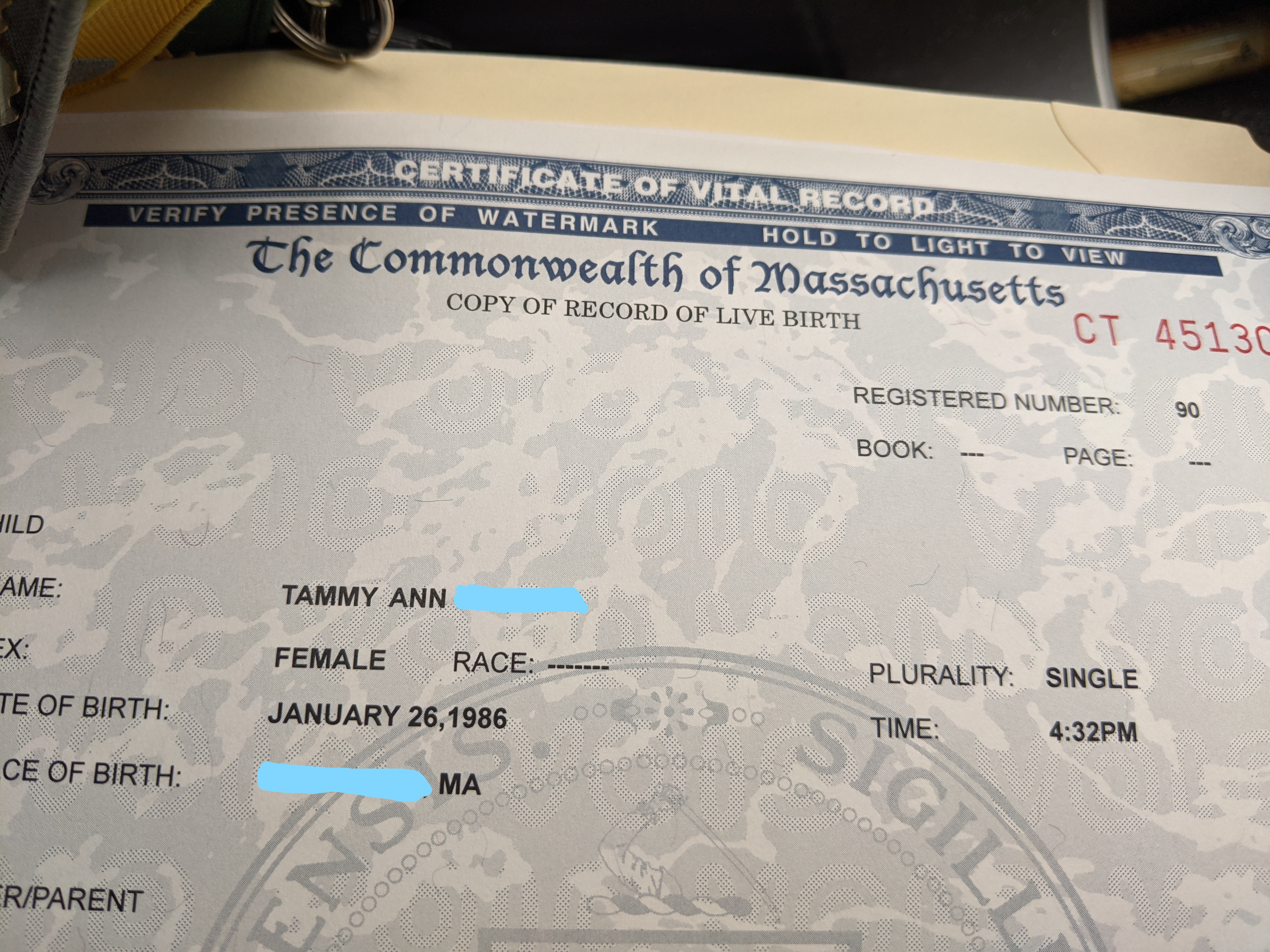 All my legal stuff says Tammy and female now!

I finally have a urology consultation with Dr. Oates for my bottom surgery! October 14th at 3:30!

Okay so I mentioned this in Discord the other day but I'll put it here too.

I had my appointment with Dr. Oates on Thursday. Basically, he's concerned about my Crohn's and the possibility of fistulas forming in the vaginal canal they will make for me. So he said that a normal penile inversion vaginoplasty might not be possible for me, and I might need to settle for what's called a "zero depth" vaginoplasty. That's where I'll have all the vagina parts (clitoris, labia, etc.), but I won't have a vaginal canal, meaning I wouldn't be able to have penetrative intercourse ever. However, he said he's going to talk to my colorectal surgeon to get a better idea of what I went through before they make a decision (I'm also going to have my gastroenterologist work with my colorectal surgeon so that Dr. Oates is getting all the info possible). He said I should know what they decide in about a month.

I've been... upset to say the least the past couple of days. Part of that is due to some of my dysphoria coming from wanting to be pregnant and be a mom. If I had the normal vaginoplasty, I could at least pretend that I could've been a mom. Can't really do that if there's no opening. The other reason is that I have so many things already working against me when it comes to finding relationships (granted I already have Medley who is wonderful). I already have to worry about people not accepting me because I'm trans. Then I need to worry about them not accepting me because I have an ileostomy bag. THEN, if I need to get the zero depth, I'll need to worry about them not accepting me because they would only be able to do oral with me and no vaginal or anal sex ever.

It doesn't help that my brain immediately went to "well I'm a fake girl, might as well have a fake pussy too". And I KNOW that that's not true. But sometimes when I'm upset I can't stop those toxic things from coming out.

I talked with Lobst a little bit (they used to be on the forums I believe). They had zero depth vaginoplasty back in 2017 (the only difference is they did so by choice). They told me some of the details, such as how you can still get wet with zero depth and how there is actually a tiny bit of depth before it stops (they said it's about half an inch deep). Talking with Lobst definitely helped a little bit, but it's just... my entire life I've had to settle for surgeries that I didn't really want. Mostly due to my Crohn's and hidradenitis.

I thought that I could finally, FINALLY, have a surgery that would give me something I wanted. But once again, my body decides to fuck me over, and once again, I'll have to settle for something that, while it will definitely be better than having my dick like I do now, is still not what I wanted.

I know that this sounds petty and I'm really sorry. I just... I wanted something to go right for me for once in my life you know?

Your perfect is your perfect. You don't have to look like anybody else to be beautiful. You can just look like yourself

Hopefully things work out and you are able to have the normal vaginoplasty. I know that this can be very trying but hopefully your doctors/specialists can figure something out. Just know that if you are not able to get the vaginoplasty that you want you are still a real woman and science is working towards ways for trans women to get pregnant. This isn't the end of the road if things don't work out.

Dr. Oates finally got back to me.

He said that after speaking with my surgeon (the one who did my Crohn's surgeries), he said that my risk of fistulas developing would be "near 100 percent". So it looks like I'm going to have to settle for the zero depth option.

Guess I should just always expect the worst.

So I had Dr. Bradway call me the other day (she's my colorectal surgeon, the one who did my last major Crohn's surgery along with another doctor, and also the person Dr. Oates spoke to) and I asked her if she could give her perspective since I'm more familiar with her and trust her.

She said "Do you remember when your J-Pouch failed and you had fistulas everywhere and you were in severe pain which is why you needed to have it reversed? A fistula in the new vaginal canal they would make for you would be much worse than that." And I was basically dying before with my J-Pouch failing.

So yeah, I don't think I need a second opinion here. Even if I found a surgeon who could do the normal vaginoplasty, I'm basically almost guaranteed to develop a fistula at some point and require multiple other surgeries. And I've had enough of those in my life. I would rather only have to deal with one surgery versus several.

It really does. I'm sorry.

I guess I'll balance this out with some positive news.

Firstly, zero depth vaginoplasty doesn't require me to do electrolysis beforehand, meaning that I can have a surgery date far sooner (I might still look into electrolysis after surgery though). I also don't have to have a consult with the plastic surgeon beforehand either. Also, I won't need to dilate (obviously), and my recovery time will go a lot quicker.

Secondly, Dr. Oates's nurse got back to me and said they got the new letter from my therapist (she needed to rewrite it to say "zero depth vaginoplasty" instead of the normal one). So once they have another meeting to discuss my case, I should have a surgery date lined up.

So yeah... my options to be intimate with someone are going to be limited to say the least.

It's a good thing there are a whole hell of a lot of ways to be intimate with someone. One thing off the table does not limit you in the slightest.

I was told by Dr. Oates's nurse that he got it wrong, and I DO need to see Dr. Slama (the plastic surgeon) for a consult before my surgery. She said that they are going to try and schedule my consult to be within 3 months of me getting my surgery so that I don't run into any insurance issues (because my insurance only has prior auths good for 3 months).

So basically I have to play the waiting game to see when they can get me into see him. And it could be a while since COVID is rearing its head again.

That sounds incredibly frustrating. I am sorry.

I was just told today that there are 13 people ahead of me for vaginoplasty, and they are planning on resuming surgeries in March (hopefully). The nurse said they usually do one or two surgeries per month, so best case scenario is I won't be able to get in until the latter half of 2022. Worst case is my surgery won't be until the beginning of next year.

I knew I waited too long
Top

Madeline wrote: ↑
Wed Feb 16, 2022 6:34 pm
Not seeing any real changes other than minor facial fat redistribution after 8 months has me reconsidering the entire idea of bothering with this shit

I knew I waited too long

What are your doses? Has your endo increased your dose at all since you started? What's your T and E level at?

Well the good news is your E is where it should be.

What is your T level at? If it's really high, that's probably why you're not seeing progress. T blocks the E from doing anything so it needs to be low. It should be around 50 ideally according to my endo.

I would ask your endo if you can up your Spiro dose.

If you can't, I would ask about Lupron/Leuprolide. It's a shot they do in the office but it's MUCH more effective than Spiro if the Spiro isn't working.

Of course, if nothing else works, you can always look into doing an orchiectomy. But that would be up to you. That would definitely take care of your T problem.

and I just sit and take it because I’m too afraid to say anything and have nowhere to go. I have nowhere to go because 9 years ago I fucked up and lost the trust of everyone who was trying to help me, so really I deserve this

the shelters are full, I asked, please don’t suggest that again because I did at least think to check
Top

You do not deserve this. You're in a bad position that is really hard to get out of. I am sorry it is like this. It sucks really bad.

I heard from Dr. Oates's nurse today. I don't have a concrete date yet but she said they are gonna try to get me a December surgery date with a September date for my consult with Dr. Slama. So I'll potentially have my new vagina before the end of the year.

Sigh... my company is changing insurance again, this time to a totally different provider. So now I need to worry about that.

Dr. Oates's nurse mentioned that they have not had an issue getting United Health Care to cover bottom surgery, but they require two different therapist letters instead of one. So now I need to find a second gender dysphoria therapist...

I have a consult date for Dr. Slama. June 16th!

So for those who didn't hear...

The nurse clarified how this will work. She said I should try to get to 223 lbs (which will put me just under 35 BMI), and that once I get to 233 lbs, I should let her know so she can schedule my surgery. She said "it doesn't have to be exact, it's okay if you're close".

Ya girl is finally FINALLY on E injections (specifically Valerate)