It's lovely, darling! (Fanart, Fanfics, Pony or not Pony. If you're creative, post here!)

Rotation battles, specialized move slots, new types, gym leaders specializing in strategies instead of types, EVs & IVs that can be altered with a slider instead of breeding, a balanced roster without intentional tiers, and a version of Eevee that can switch between any of the types at will! All ideas that went into this project's conception. Fully Animated Battle RPG!
Every single pony and attack is uniquely animated to bring these pixel art battles to life!

Explore a Vast World!
An enormous, vibrant region awaits! Travel through deserts, mountains, forests, graveyards, and underwater temples on your quest through the Pinto region.

Power Up Your Pony!
Form a powerful bond with your shapeshifting pony companion and watch it grow stronger, learn awesome new moves, and take on the toughest of enemies.

Travel with Your Pony!
Surf across oceans and lakes with any swift-swimming ponies. Teleport to the nearest Health Center whenever you like with a simple phone call. Even have whatever pony is with you smash any boulders in your path, just because they all can!

Customize Your Team!
Choose who you take into battle from a selection of 60 Ponies and their Ultra Forms. You can alter their moves, stats, and equipment to become an unbeatable trainer!

Hundreds of Different Moves!
Using attacks grouped into Light, Heavy, Status, and Tutor slots that make you think more carefully about which moves to take into battle.

Discover the Secrets of the Legendary Alicorns!
Powerful, winged unicorns that embody the Sun and Moon are said to be the strongest ponies to ever live. People have wanted to harness their power for personal gain since ancient times. With recent advancements in technology, however, it might be easier than ever for their power to fall into the wrong hands...

Collect Badges and Save The World!
You’ll have your skills tested by expert Mavens and fight for your life against the evil Paragon Cartel. Simple story objectives that fans of Monster RPGs will be familiar with, but perhaps with a few surprises along the way... 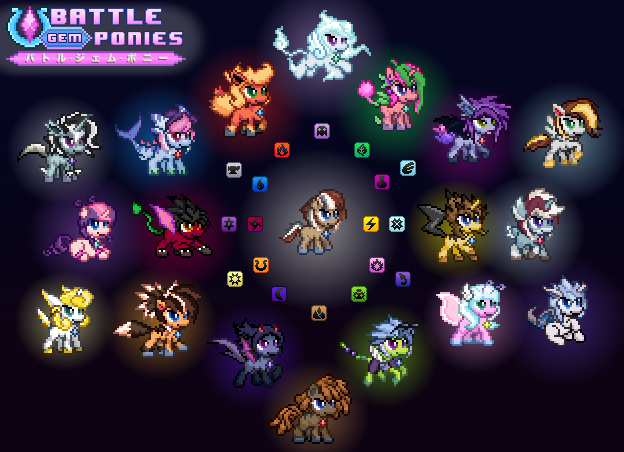 Find All the Yotes Social Pages On:
Linktree: @YotesGames

Oh nice, didn't realize the dev was here! Great job on this
Top

Got a video showing off all the battle features we currently have:

Battle Gem Ponies is LIVE on Kickstarter Until Sept 3rd!

(Play the Demo, See if You Love it)

The long overdue June/July Devlog is here! (And in video form!)


From now on we'll be doing these instead of the usual monthly writeups on the Yotes Games blog since its more fun & easy to watch/listen than navigate to a particular website and read. So subscribing to our YouTube channel will keep you up to speed on everything! 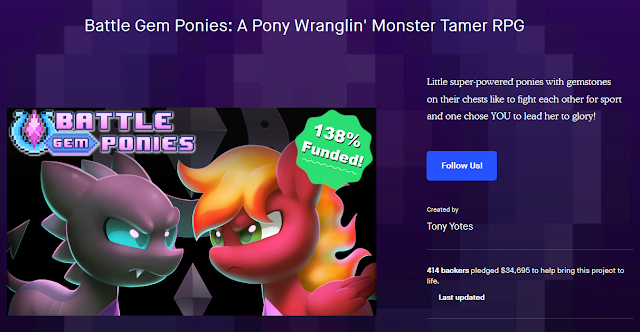 The Battle Gem Ponies Kickstarter has ended with 414 Backers that pledged $34,695.50!!
https://www.kickstarter.com/projects/to ... -tamer-rpg

For anybody late to the party, Our Patreon is up so you can pre-order the game there as well.

We couldn't be any happier with how this turned out. Flew past every Launch Day Stretch Goal with an extra month's budget to spare! It's all an indie team could ever want.

Thank you. Thank everyone who pledged, followed, shared, liked, or anything to support us and show that we aren't just shouting into the void hoping someone out there cares. This campaign proved to us this game has an audience. And now we have names and faces for the people we're building this for.

​In case you missed it, here's the Countdown of the final moments of this awesome (and exhausting) Kickstarter campaign:

Got a fresh new demo up, with a smotherin' of Bug Fixes for ya!
Every glitch and error we could find since vending at Everfree Northwest.

You can Play It Here!
https://yotesgames.itch.io/battle-gem-ponies


The Big News
The Specifics

Updated our Patreon Description, Goals, Rewards! A 2nd chance for anyone who missed out on the Kickstarter Hype 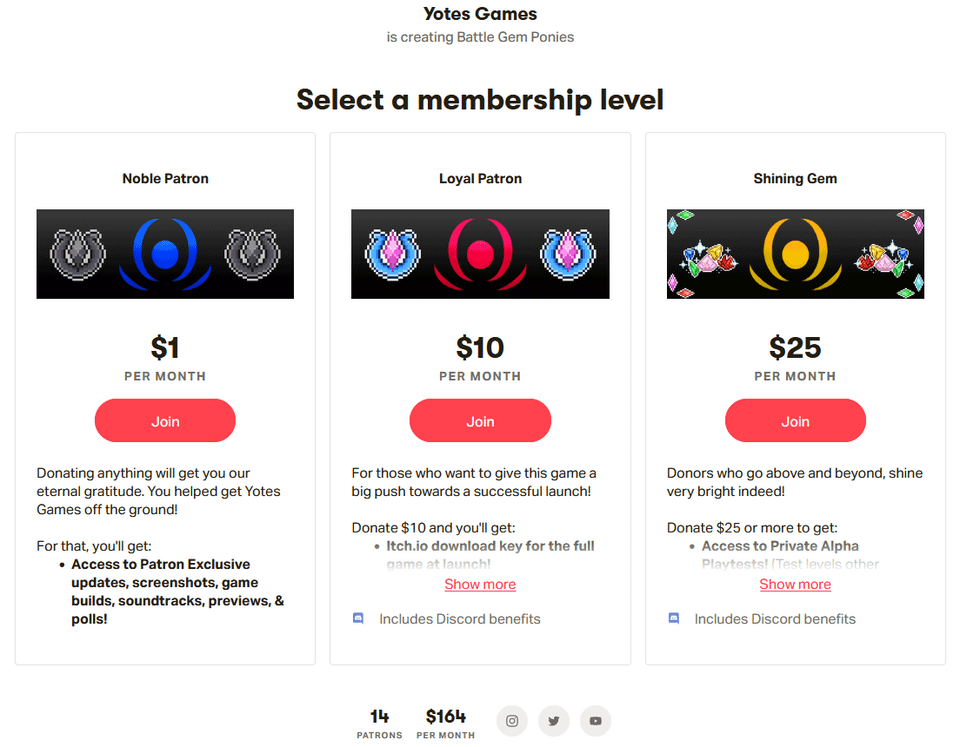 We now have the funds to make the game, but let's see if we can grow the studio over time and make bigger/better things.

Join in on the journey (or maybe just grab yourself a T-Shirt) on our Patreon -> https://www.patreon.com/YotesGames

See what's up with the numbers behind our Combat System in our new Breakdown series video!

New Devlog Hotfix TARTARUS! is now on YouTube, check it out!

After chipping away at development tools and setup behind the scenes, the Yotes Games team is back with an (admittedly late) update on what we've been up to!

In short, things like new scenery, a debugged overworld, and more videos breaking down specific mechanics can be expected as we charge full-speed ahead into the next year.

The New 2022 Overworld Preview Demo is finally available on Itch.io!

We'll Be Vending at Everfree Northwest 2022!!

Well, Hay! How cool is that?

We're gonna include FULL name labels in the Ponipedia from now on. You'll also be able to scroll to the top and bottom much faster.

Mid June Progress Report (Let's Get These Ponies in a Row)

Mid June Progress Report (Let's Get These Ponies in a Row)

New Horizons on PINTO ISLAND! | Battle Gem Ponies Devlog #5
See the culmination of all our gamedev efforts this Spring!

Big thanks to everypony that stopped by to play our game at TrotCon! 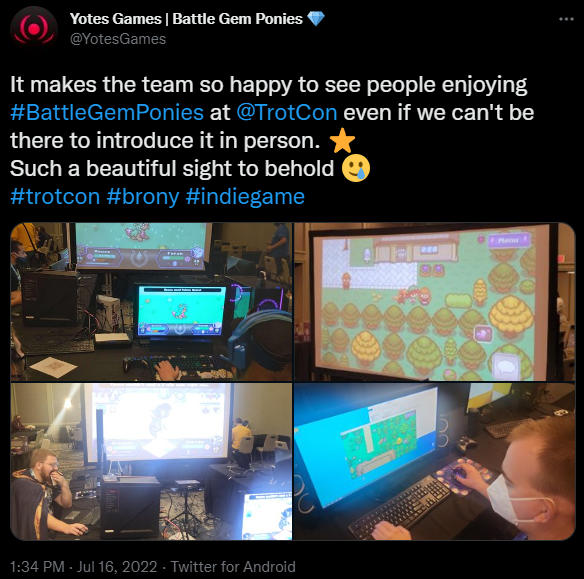 The new Ultra Demo has Arrived!

The new Ultra Demo has Arrived! 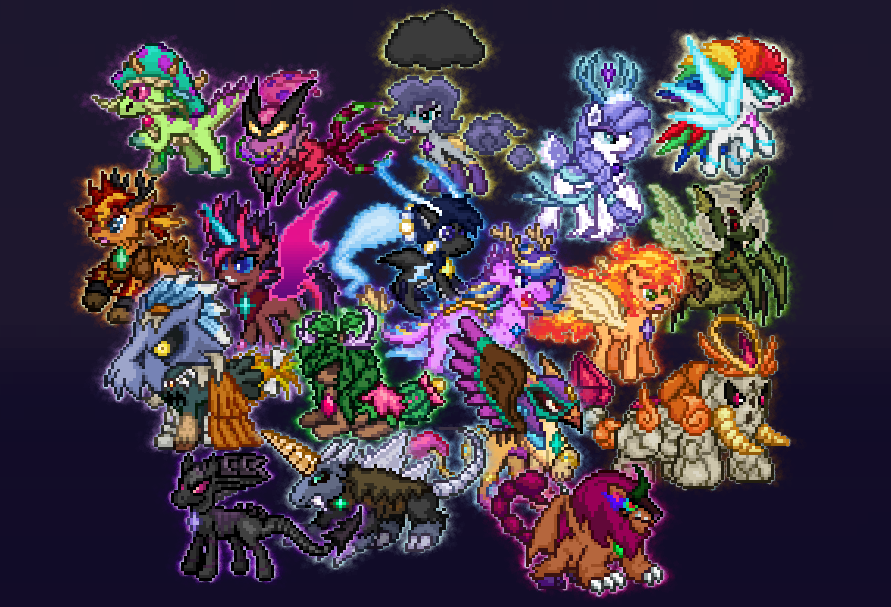