Over at ResetEra, the Pony community there has been enjoying Tangled: the Series a lot, so I figured I should make a thread for it here. Largely going to copypaste my season 2 OT from ResetEra, with some modifications. 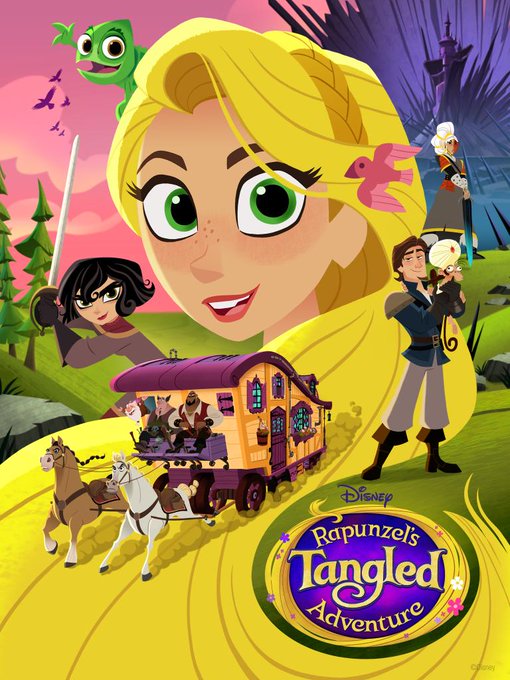 Technically, the series changed its name to Rapunzel's Tangled Adventure with season 2. I'll just keep calling it Tangled: the Series ¯\_(ツ)_/¯

Airs Sunday 9 AM ET on Disney Channel, starting June 24, 2018
Or watch it at midnight on DisneyGo

Tangled: the Series follows after the events of the movie but before the wedding special, with every lead movie actor reprising their roles and much of the movie production crew returning, including Alan Menken handling the songs.

Months after reuniting with her birth parents, Rapunzel comes across mysterious stone spikes that restore her magical hair but start wreaking havoc in Corona. She journeys outside the kingdom with her boyfriend and former thief Eugene (AKA Flynn), her lady-in-waiting and guard Cassandra, and animal friends Pascal and Maximus to unravel the mystery of these black rocks.

Season one started out as a charming but ultimately unremarkable series, but then things took a hard turn in the mid-season special "Queen for a Day" and it became quite good, going in directions you wouldn't expect from a Disney Princess show. Previously, I provided a recommended episode guide, but enough people liked certain episodes I didn't include, and enough small details from those other episodes come up later, that there isn't much of a point to following it. Still, it's there if you want it.

Note that from this point on, the thread will freely discuss season one spoilers.

PREVIOUSLY ON TANGLED: THE SERIES 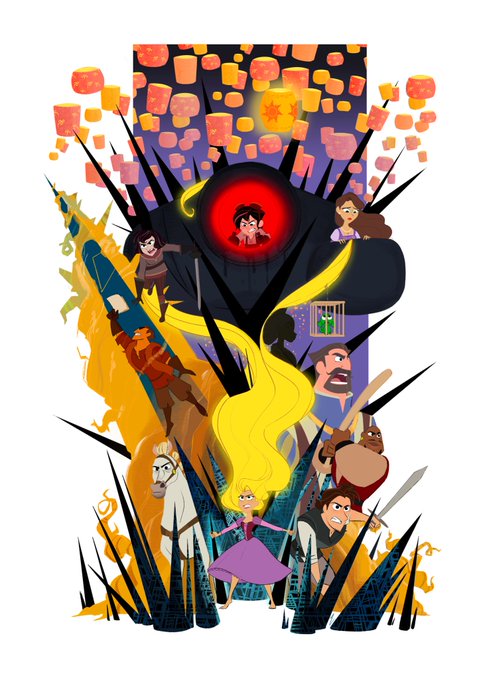 Through a series of unfortunate circumstances where everyone made mistakes but no one was really at fault, Varian the alchemist found his father sealed in a crystal, and despite her promise to help, Rapunzel didn't. With his attempts to free his father failing, Varian grew mad with vengeance and attacked the royal family.

Rapunzel discovered her ability to control the mysterious stone spikes and used them to defeat Varian's army of giant robots. He's now in jail, but his father is no closer to being freed and he hasn't given up on his revenge. Rapunzel's parents had previously kept her restricted to inside the walls of Corona, but in a way, that was still locking her up in a tower. Understanding that she shouldn't be restrained, they allow her to discover her destiny beyond the kingdom. When it comes time for her to return, the lanterns will still be there to guide her way.

What exactly is the connection between the sundrop and the black rocks? Who is that mysterious stranger that cut an indestructible rock in half? What role does the ancient sorcerer Zamfiri play in all this? Now that Rapunzel has achieved Super Princess, will she discover a level even further beyond? Find out in season two!

And some miscellaneous cute GIFs. Mainly of Rapunzel.

And from the newest episode,

I'm so edgy you could jump off me to your deliberate death.

Clips from the season 2 commercial seem to show that the Everfree Forest has nothing on this place.

And here's a pretty good AMV

Newest episode features Rapunzel having to deal with basically Trixie combined with Mudbriar. It's pretty great. 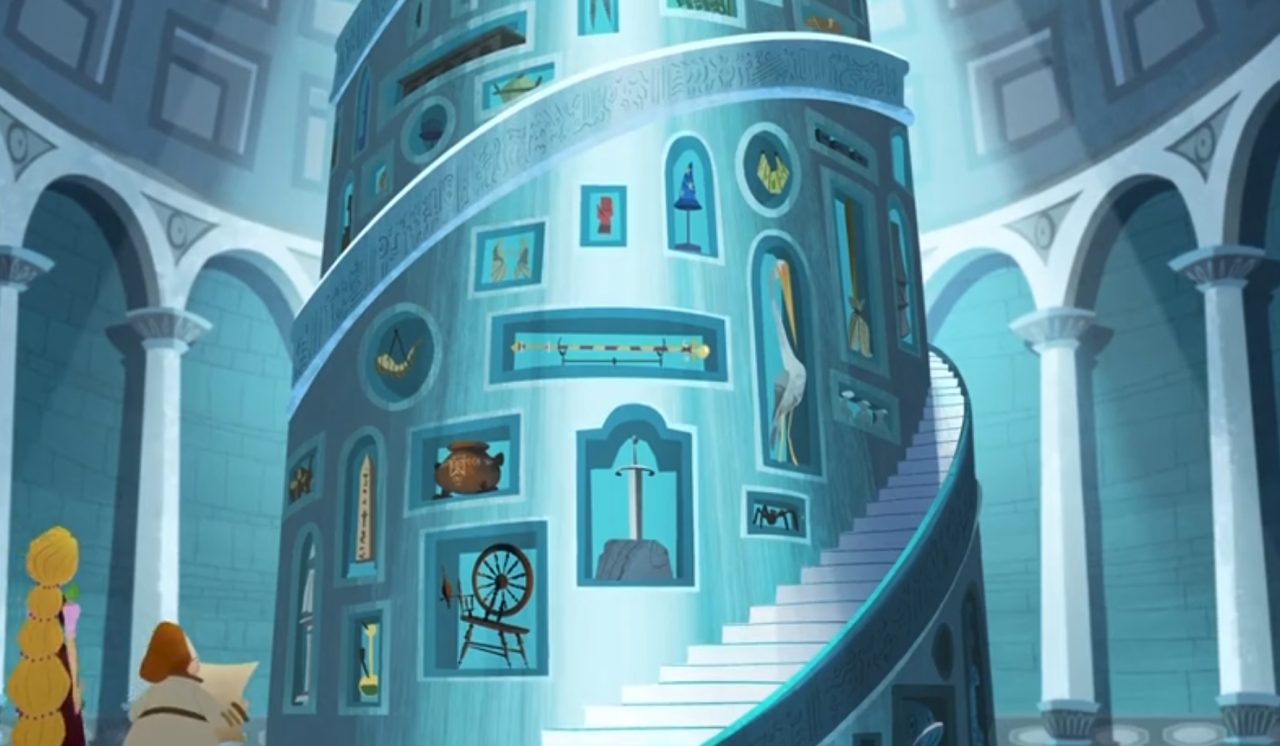 The sword in the stone
Merlins Hat
The Black Cauldron


I've thought about trying this show, but retconing adorable brunette Rapunnzle is just not right.
Top

Well, you still get a decent amount of brunette Rapunzel in the pilot movie.


And this all happens before the wedding short, so she'll be brunette again by the end.
Top

This whole series was worth it just for Queen for a Day. It's still generally good, but man am I jonesin' for that high again.
Top

Yeah, while I like the show a lot still, it hasn't come close to the sheer, "Oh shit!" factor of Queen for a Day.

... This hiatus sure is lasting a while, huh?
Top

Series is coming back February 10! Season 2 episode 11, "Max and Eugene in: Peril on the High Seas". No description yet.

As a reminder, the last episode was late August

Thanks for the bump! I'll check out the new stuff.
Top

Well it turned out not to air in Germany after all. However, it is airing in the US on March 3. Then it gets doubled up from March 10 on, because Disney.

11. Peril on the High Seas - March 3, 2019
Max and Eugene get in distress at sea and are saved as another ship comes by. But the ship is full of prisoners and the prisoners have taken over control after a riot.

12. Curses! - March 10, 2019
Rapunzel meets again Madame Canardist and Vigor the Visionary. Vigor issues a curse on Rapunzel shortly before she and her friends cross a dangerous mountain pass.

13. The Eye of Pincosta - March 10, 2019
To get Eugene out of jail, Rapunzel has to band together with Eugene’s ex-fiancée Stalyan: they need to find a diamond that Eugene and Stalyan stole years ago.

14-15. Rapunzel and the Great Tree (Two-Part) - March 17, 2019
The path of black rocks leads Rapunzel and her companions to the Great Tree, an ancient, magical place. They encounter the unpredictable Hector and discover the moonstone magic formula.

16. Rapunzel: Day One - March 24, 2019
Rapunzel accidentally gets hit by an amnesia spell that causes her to forget everything since she left the tower.

17. The Brothers Hook - March 24, 2019
To lift everyone’s spirits, Rapunzel takes her companions to Hook Hand’s concert, but the reunion of the Hook Brothers awakens elusive memories in Hook Foot.