The game is called Missy, after its main character. You could simply describe it as a "metroidvania" where you play as a robot, but it's a bit more complex than that.

Missy has a fairly specific genre balance to it that I don't think many games have gone for. It's designed around a much less combative play style than you typically see in a "metroidvania" game. The game still has its "enemies", and it has a whole health/hazard/death system in place, but they're to be treated more as platforming mechanics than combat mechanics. At the same time, the game is not so much about platforming as it is about exploring and solving puzzles. Some of said puzzles may be related to discovering the least hazardous method of traversing any given area, but brute strength takes a back seat to agility which takes a back seat to sharp thinking.

Other than that, I've got a bunch of really interesting abilities for Missy in mind and really want to explore the possibilities.

Missy takes place in a modern-day setting with a sprinkling of fantasy/sci-fi here and there. The story primarily wrestles with two concepts: religious faith and self-identification. Don't expect to be met with anything very cinematic though; the story will just begin from a certain place in the timeline, and after the first series of dialogue boxes it's mostly just gameplay from then on.

To be more specific though, the game is about a robot girl who is found in a crater and awakened by a man of the cloth. The girl claims to not remember who she is despite retaining plenty of general knowledge about the Earth and its inhabitants. The priest's main concern is what might happen if the general public found out about her. The two of them agree it would be best to buy themselves some time to think by retreating to the most remote location they have available: A modest vacation home between lake and mountain, a property which the priest had inherited from his late father. Once they reach their destination, the events of the game ensue. 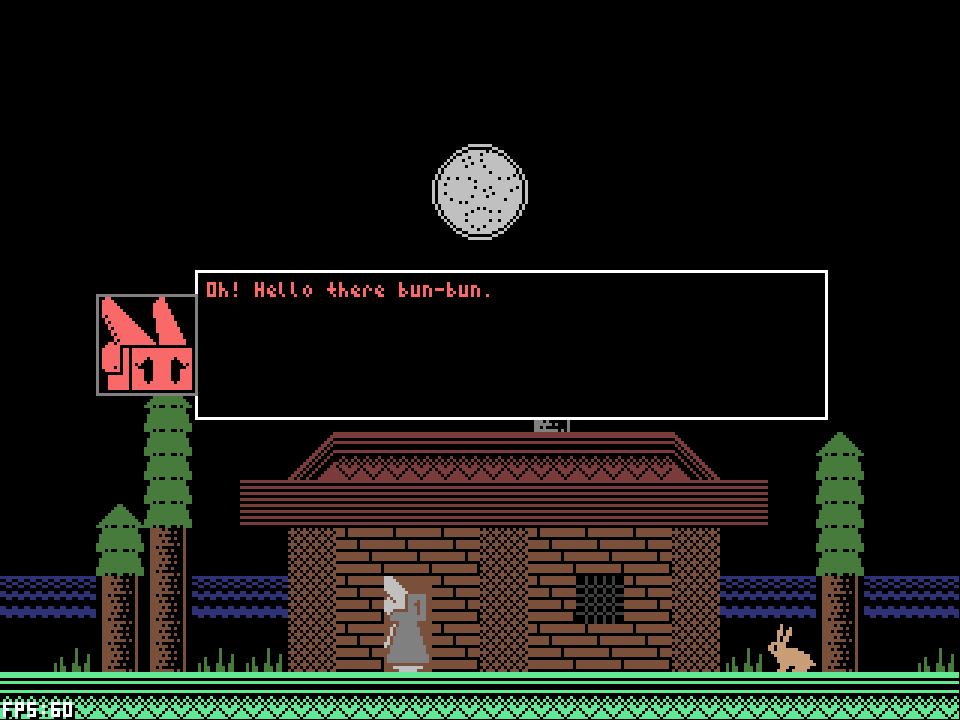 If you want the technical stuff: I went for a graphical style with very simple limitations: 1-bit images, 1 background layer, and 1 sprite layer. 1-bit means that every tile or sprite consists of 2 possible color values: black or white. Black regions are considered transparent and do not overwrite existing pixels on the screen*, whereas white regions are drawn according to one of the 256 palette nodes seen in the lower left here: 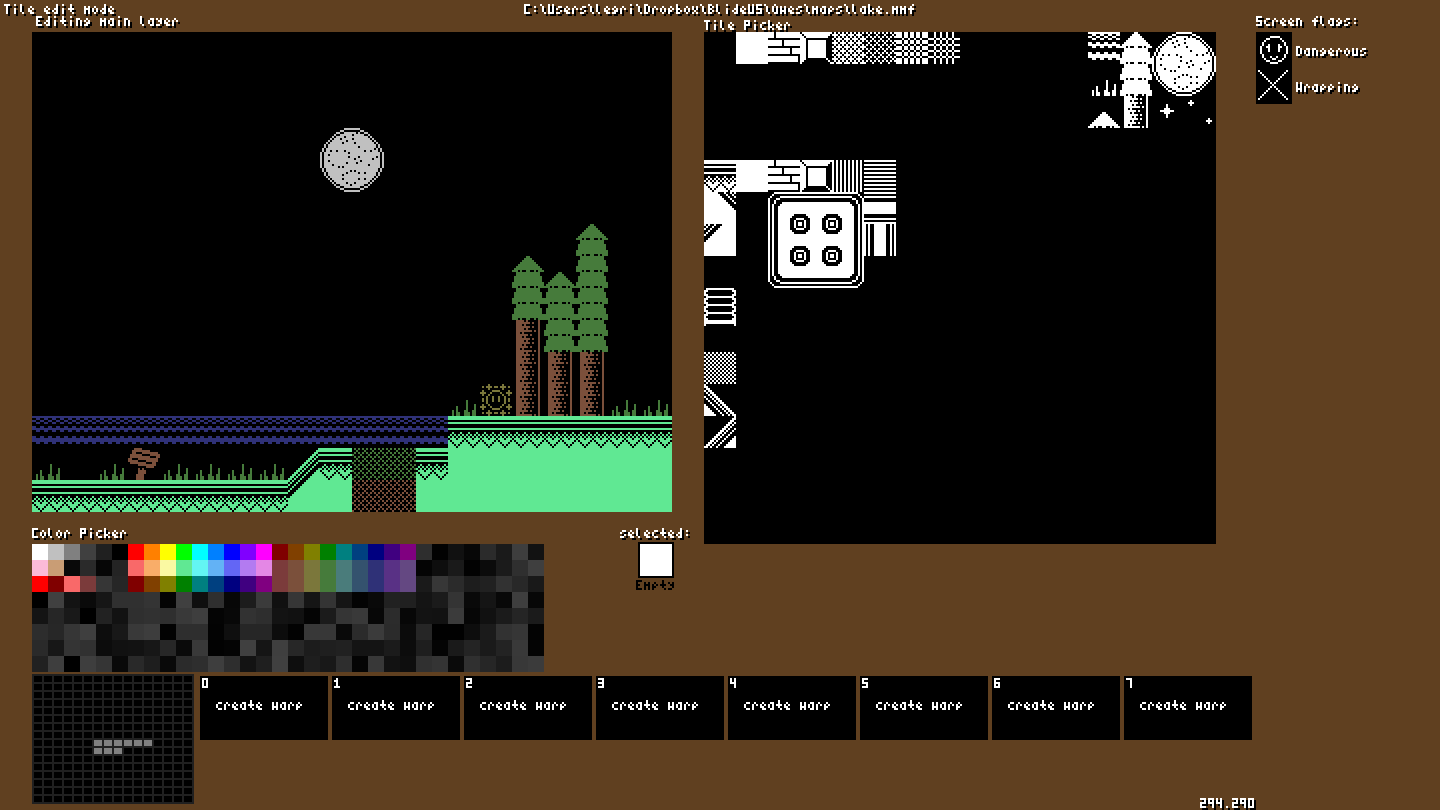 (this is what my level editor currently looks like, by the way)

I call them nodes in this case because they are not limited to single colors; each palette node can be made to choose its color via calculation based on ever-changing variables. This means anything rendered using that node might cycle through colors, flash, flicker, and so on. (For instance: In the above screenshot, you can see four shades of red lined up on the third row. These four nodes actually cycle through 9 hues, but I would need an animated GIF to actually show that.

*Palette node 5 still allows the white region of a tile/sprite to be rendered in black. But I'm probably only going to use that node for the rectangles used to draw text boxes and stuff.

With this in mind, most objects are rendered in a single color. The only exception I have made so far is the player character, which is actually 4 different sprites drawn in tandem. The different parts of Missy's frame change color according to the state of her acquired upgrades and remaining HP. The following image shows every theoretical possibility for the upgrades I have planned as of this writing: 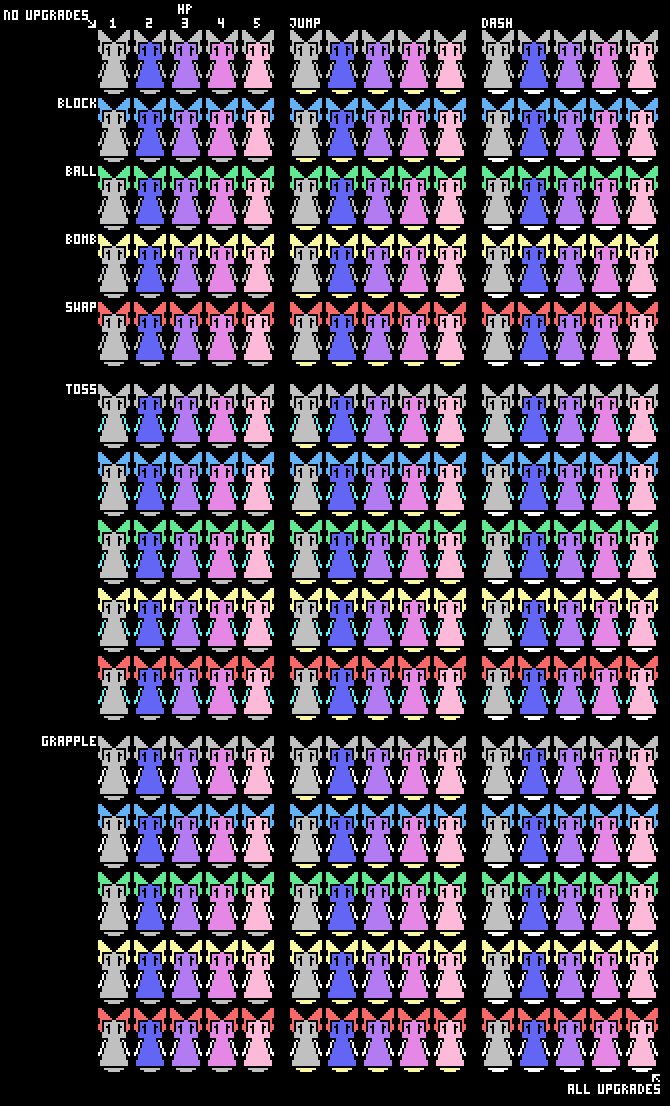 (i am specifically planning it out so that collecting every upgrade results in Missy's "canon" color scheme, seen in the far bottom right)

I feel the need to preface this section with a bit of a disclaimer: Making this game's music is going to be a learning experience for me. I have no real prior experience composing music, nor am I looking for anyone to make it for me.

With that said, I'm using Bfxr for most sound effects like I tend to do. The game's music is being made with Little Sound Dj, a music workstation that produces authentic Game Boy sound by way of being a literal Game Boy application.

So far I have made two little tunes that may or may not make it into the actual game:
(SoundCloud won't loop these seamlessly, but the game will.)

Just Business is a pretty basic 2-minute loop. I was still re-familiarizing myself with LSDJ so I played it very safe by having one melody repeat itself in various ways.


This one's only a 10-second loop, intended to sound very alien and unnerving, and only played during a few story sequences. You could say that eerie music glitches were the inspiration for it.

I will keep this thread posted with new developments and maybe some weird ramblings based on said developments.

Right now I am mostly designing the first map and figuring out how I want the game's overall progression to be laid out. I'm not terribly worried about how story-related places are bridged together, but there are two major progression archetypes that interest me:

First there's the Hero Core/BotW archetype, where the very beginning and the very end aren't far from each other, but you would have a much harder time finishing out the game with fewer upgrades. I imagine this would be difficult thing to make work in a game that isn't combat-oriented, because I'd have to be able to make the final stretch consist of obstacles that are somehow just beatable with a bare minimum mobility while still allowing each and every upgrade to help out in some way. And I'd want to avoid just having That One Ability that ensures an easy trip unless it happens to be one of the final upgrades you can get.

Then you have the Rabi-Ribi archetype, which is sort of a variation on Super Mario 64 or an evolution of Super Metroid: Once you move on from the prologue to "Chapter 1" proper, the story advances by having defeated a minimum number of the game's bosses, then returning to a central location and talking to an NPC. You're then transported to a small, linear story map, and completing whatever there is to do on that map brings you back to the main world and begins the next chapter. Essentially you need to "recruit" like 10 of the game's 20-something major bosses to open the path to the finale, and the rest of them are only required to finish the post-game subplot.

I guess it ultimately depends on how many story events I end up with, and how many of those I deem "mandatory" as opposed to world-building or subplot events. Both of the aforementioned formats sorta require me to have a few magnitudes of optional events over the mandatory ones, and admittedly my writing style has a certain wordiness to it where characters already follow plot-relevant dialogue up with whatever tangentially-related derail would typically spark up in casual conversation.
Top

and since i haven't posted one yet, here's my current todo list:

(excuse the tabs; they do a much better job within my actual source code)
Top

That flow chart of upgrades looks rad, I am excited for this game