Episode, movie, and comic book discussion threads are kept here once they have been released.

Starlight begins to prepare for becoming Head Mare of the School of Friendship. She decides she needs a Vice Head Mare, and Trixie thinks she'll be a "shoe-in" for the position, but...

This thread is for discussion of the episode. This episode airs at 11:30 Eastern / 8:30 Pacific on Saturday, September 14!

Official preview clips and images are okay to post, as is speculation about the episode. Spoilers from non-US releases are NOT OK to post.

One of the better of s9
But...
This one's too young
Top

Just put Cheerilee in charge and make the schoolhouse a satellite campus.
Top

Or upgrade the schoolhouse already. It's well past time for something that isn't a pet project of the royals to get some funding.

Princess Book Horse has to give funds for the education system to create more book horses!
"The knack of flying is learning how to throw yourself at the ground and miss." - Douglas Adams
Top

She talked in Slice of Life!

I was rooting for her to become headmare, obviously. But I'm okay with her turning it down to stick with her music career.

That was a cute episode, and I have no complaints.

Condolences to Phyllis, though.
Top

This was a fun episode. Lots of cameos and Trixie was as good as ever.

I liked how Dr. Whooves knew exactly what to say to please Yona's parents. Also, poor Gallus...if Granpa Gruff really is proud of him, he needs to tell him that. It was funny when Octavia and Vinyl's music got Gallus' attention in a hurry.

There isn't a punishment worthy of all you've done!

I guess you'll have to let us go, then.
Top

I have to wonder how good of a guidance counselor Trixie would be. She seems to put ambition and self-interest above all else, and while I suppose that's necessary to an extent, it still worries me regardless. Maybe that withering verbal beatdown from Starlight put her in her place, though.

Spike reading Twilight's proclamation in the beginning made me realize just how much shit's getting real now. With the end approaching so soon, it's a wonder that there aren't more freakouts than there are, whether from the show's characters or us in the audience.

I felt glad that Sunburst got a real job and not just some ceremonial role up north. 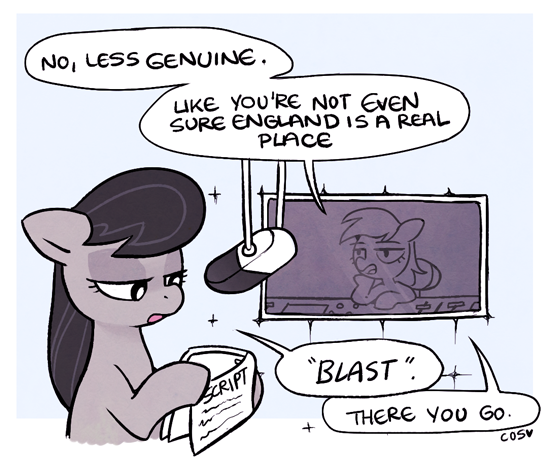 England doesn't exist in Equestria, so her accent is perfectly acceptable.

This was a great episode.
Top

Funny timing after that college admissions bribery scandal... OK, there isn't much in common besides a school being involved, but I was reminded of that. But in general nepotism is an open secret in schools, both for admissions and hiring.

This was a good final look at Trixie and Starlight's relationship, and I enjoyed seeing the process of finding a vice headmare. It made sense, and it was fun seeing Trixie screw up. Trixie becoming student counselor in the end is a bit of an odd fit, but Sunburst becoming vice headmare (I guess that's just the title now) made a lot of sense, and I was surprised I didn't think of that. I suppose Trixie really is the best for talking out solutions. Speaking of which, I liked Starlight's line that she's a lot of help when she doesn't mean to be.

All of a sudden I might actually get a bingo this season. This opens up either "Far future seen" or "Equestria Girls character besides Flash" as a bingo-maker, since we know Celestia's leaving by the end. And there's a possibility part two of the last two-parter starts with Celestia defeated.


There was an extra two minutes in this episode cut out, made up of extended Starlight and Trixie line reads. Shame we won't be able to see this.
Top

Your MRI results have shown total infection to now be approximately one fifth of the full mass of the tissue.

Your brain is about 20% tumor.

This ep absolutely owned. The gags were top notch, the line delivery, and the faces were amazing.

And the fact it had a hard close, for once.

There was a link here, it's dead now and I'm sad.
Top

I completely fucking forgot about Sunburst. I watched this entire episode and not once did I even remember he existed until he showed up and I went "yeah that makes perfect sense. Why the hell didn't anyone else think of that 20 minutes earlier?"

So, you know, good job show. Didn't see it coming.