A buddy gifted me the Bundle for Racial Injustice and Equality from itch.io, consisting of hundreds of downloads ranging from "real games" like Night in the Woods and Celeste, tabletop games and modules, to non-games like art assets and soundtracks. 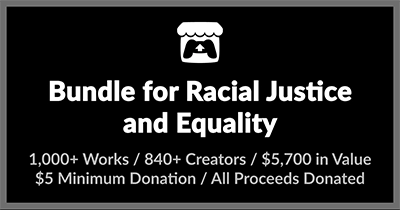 I have some cool buddies.

Small projects like the ones in this bundle are where you sometimes find the most creative ideas. And I believe it's healthy to stay open-minded and seek new ideas, whether in the videogames you play or in anything else in life but mostly videogames. So I made this thread to share my discoveries as I sample (at least a few of) the 600+ titles in this bundle, the insights and disappointments, the hits and misses, the gems and the junk.

The vast, heavily pixelated horizon stands before me and I am ready to explore it. 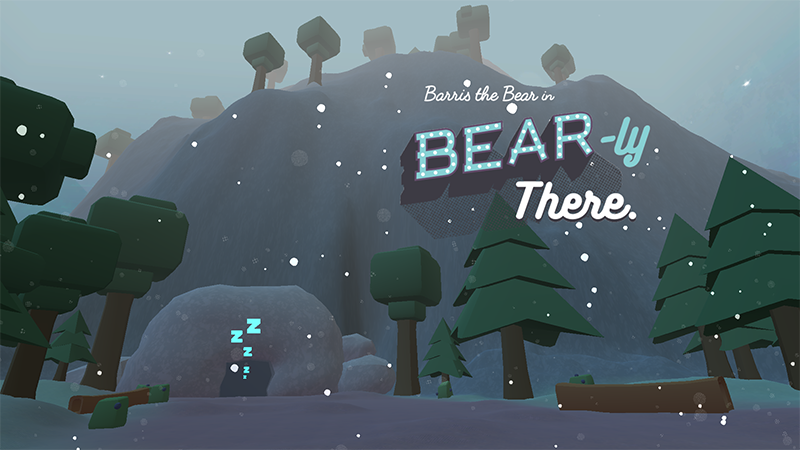 The Premise: As a bear, eat as much as you can before hibernating
The Gimmick: You can't walk, you can only fling yourself around ragdoll-style

I want to make clear from the start that I will never, in this safari, call any game "bad". For one thing, that's neither a helpful nor relevant term -- what I'm in search of are interesting and fresh perspectives, not quality per se. Related concepts? Perhaps. Identical concepts? No. Second, I feel a "good/bad" label would be unfair to the creators and their own goals. Some of the items in my bundle were never intended to be "good"; they were written for a game jam, or perhaps as a creative programming exercise, as a vehicle to explore a specific concept, or entirely for shits and giggles on a rainy afternoon. All are valid motivations and I'm obviously not going to judge these creative flights of fancy as I would an AAA title. Third, and most importantly, all of these titles were free, so what the hell am I complaining about? If I got 0.0001 nanoseconds of entertainment, and it didn't cause physical damage to myself or others, then that's pure gravy.

Which brings me to Bear-ly There, from Toronto-based Pale Moon Games, written for a game jam in 2017 and you can definitely tell. 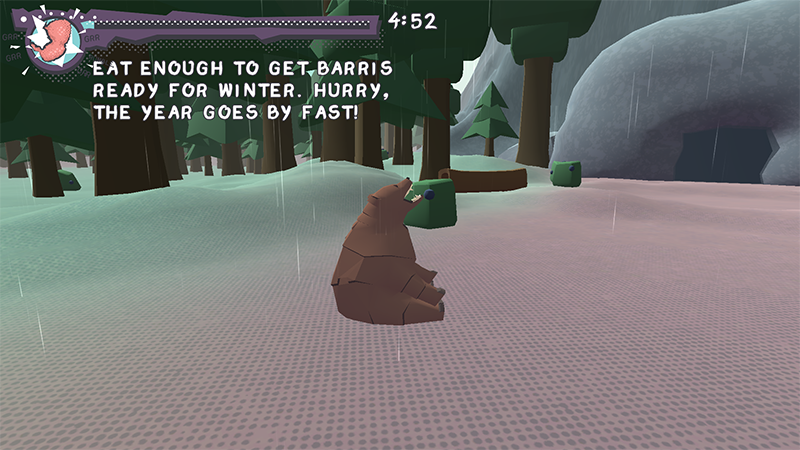 This is a five-minute game where, as Barris the bear, you have that much time to stuff your gut with berries (found on bushes) and salmon (found in the river), then return to your cave. Simple premise. Complicating matters is that Barris, for some reason, has no walk animation. Instead you press the space bar to propel him ass over teakettle in the vague direction you want him to tumble, as if some offscreen handler had jolted his lazy ass with a gravity gun. When you get near food you click the LMB, and if Barris' ursine maw is more or less next to the item, he eats it and your hunger bar fills up a little.

Additional features include a pair of sunglasses you can pick up, so now you're wearing sunglasses; and also you can press the RMB to shit, so now you have shat. 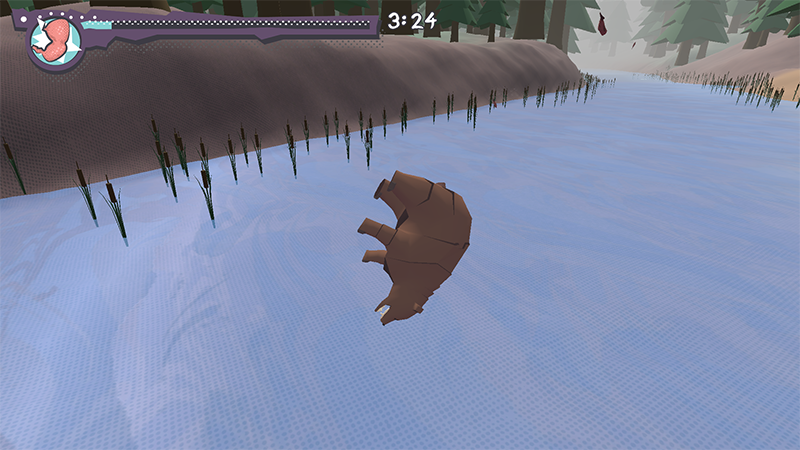 So obviously this was a game made for laughs, not intended to be the next Death Stranding or anything. Even by those standards, though, I found Bear-ly There more frustrating than charming. Launching Barris inelegantly about, gravity gun-style, never felt smooth to me, nor was the ragdolling complex enough to provide the cheap physical comedy of, say, a QWOP.

What I will say in its favor is that "you're a bear, go eat everything" is a fine concept for a video game, and I think Bear-ly There would have been more fun if it had just let you do that, rather than design a movement gimmick that keeps you from doing it.

Was this a hidden gem? No.

Did it explore concepts, tackle fresh ideas or overlooked subjects, or expand the definition of what games could be? It did not.

this is a good thread

i haven't gotten around to playing anything i got from the bundle but there are a handful i had already played and would recommend:

if you're fine with others joining in, i'll report on new findings if/when i get around to delving into this bundle

Thanks! Everyone who wants can join in; it's a huge bundle and there are plenty of titles for everyone. I want to know what you think!

A goon set up https://randombundlegame.com/, which is a website for randomly picking or browsing through all the games, books, and other pieces of media in the bundle.

The Premise: Toast marshmallows and other food items...
The Gimmick: ...but don't burn them!

From designer Layton Hawkes comes puzzle game Campfire Cooking, which is super fun and everyone should play it. And then tell their friends so they can play it too. It's what every puzzle game should be: simple rules and simple controls leveraged creatively into brain-teasers, wrapped up with an appealing presentation. I mean, who doesn't like campfire cookouts? I wish I was doing that right now instead of wrangling spreadsheets eight hours a day then playing video games in a desperate and futile attempt to decompress, but enough about me. 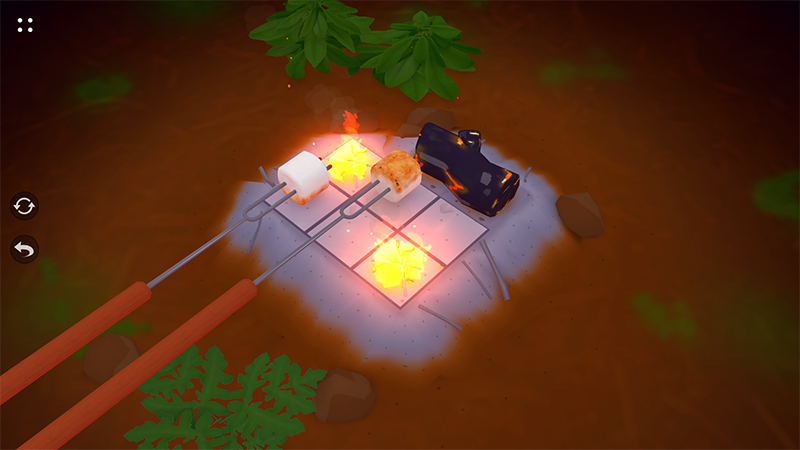 Your job in Campfire Cooking is to toast up some marshmallows on a square-based play space. You want to get your 'shmallows over the flame squares. Move them around with the skewer; push forward, pull back, or roll left-right. Rolling laterally also flips the marshmallow over, which is crucial because you need to get both sides a delicious golden brown. Toast the same side twice and it'll burn! I don't have to tell you how to roast marshmallows, you know already.

Your skewers can get in the way of one another, but you can also nudge one skewer with another to move it without rolling. Some skewers are good old-fashioned sticks, and these can be rotated in the four cardinal directions, while metal skewers have to keep the same orientation.

These and other basic mechanics are the core of the game's yummy puzzles, manipulating your marshmallows around the limited space to toast them all just right. I found the difficulty and the difficulty curve pretty much on the nose, though be advised that I am not particularly bright. 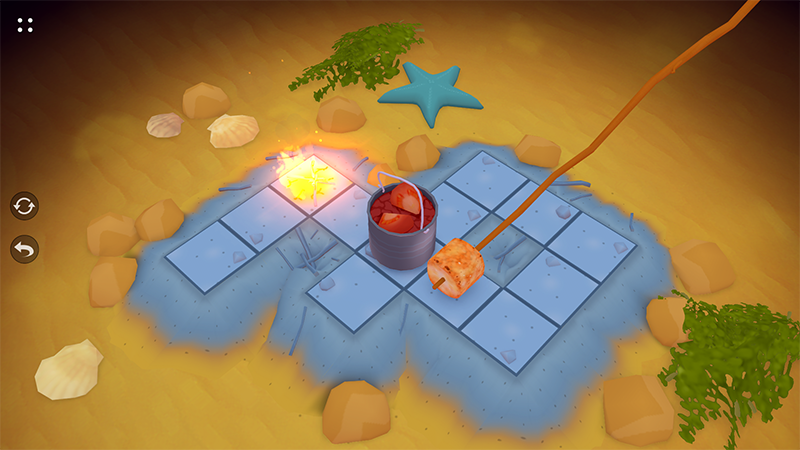 With each set of puzzles, new mechanics are included. For example, Starfish Island Trail introduces fondue pots. You push these around with your skewer, and they must end the level on a flame square. 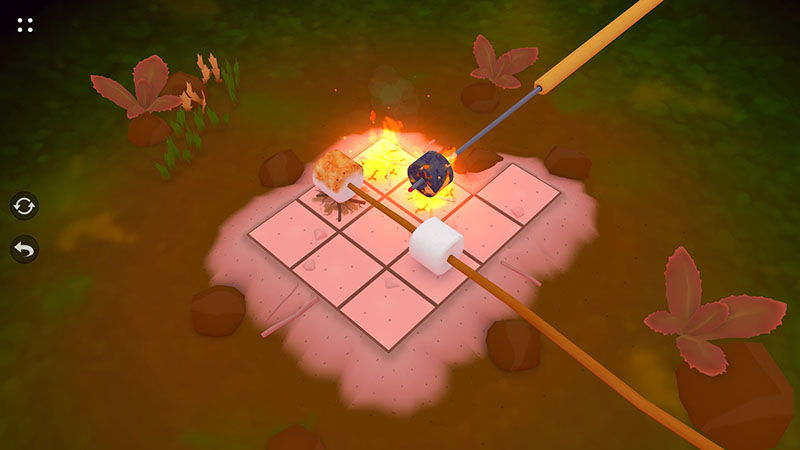 Fern Jungle Trail adds pre-burnt marshmallows to your skewer; once ignited, these can be used to light tinder squares to make new flames.

As I hope the screenshots show, the graphics in Campfire Cooking are simple but attractive. It's got a pleasing audio-visual aesthetic, and every trail has a different look and music. Steam page is here if you want to see it in action. For six dollars (or free in the bundle), it's definitely worth the investment. 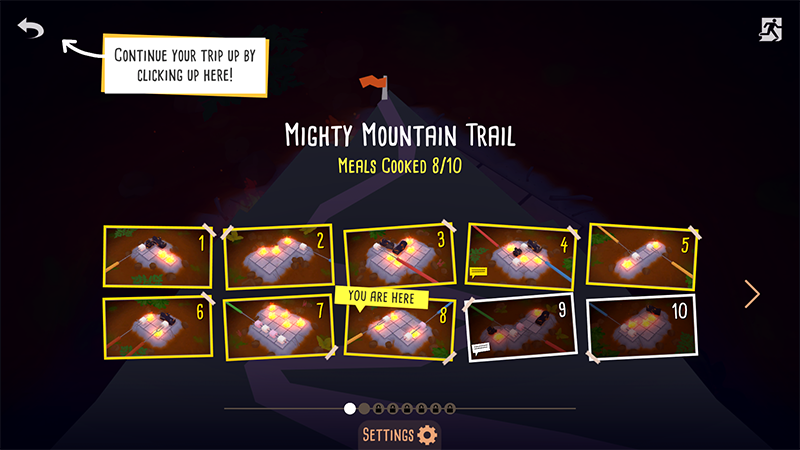 Was this a hidden gem? Yes.

Did it explore concepts, tackle fresh ideas or overlooked subjects, or expand the definition of what games could be? Well, I can't recall any other games about marshmallow toasting. It's a creative idea executed successfully. You should play it. The game deserves to be popular. 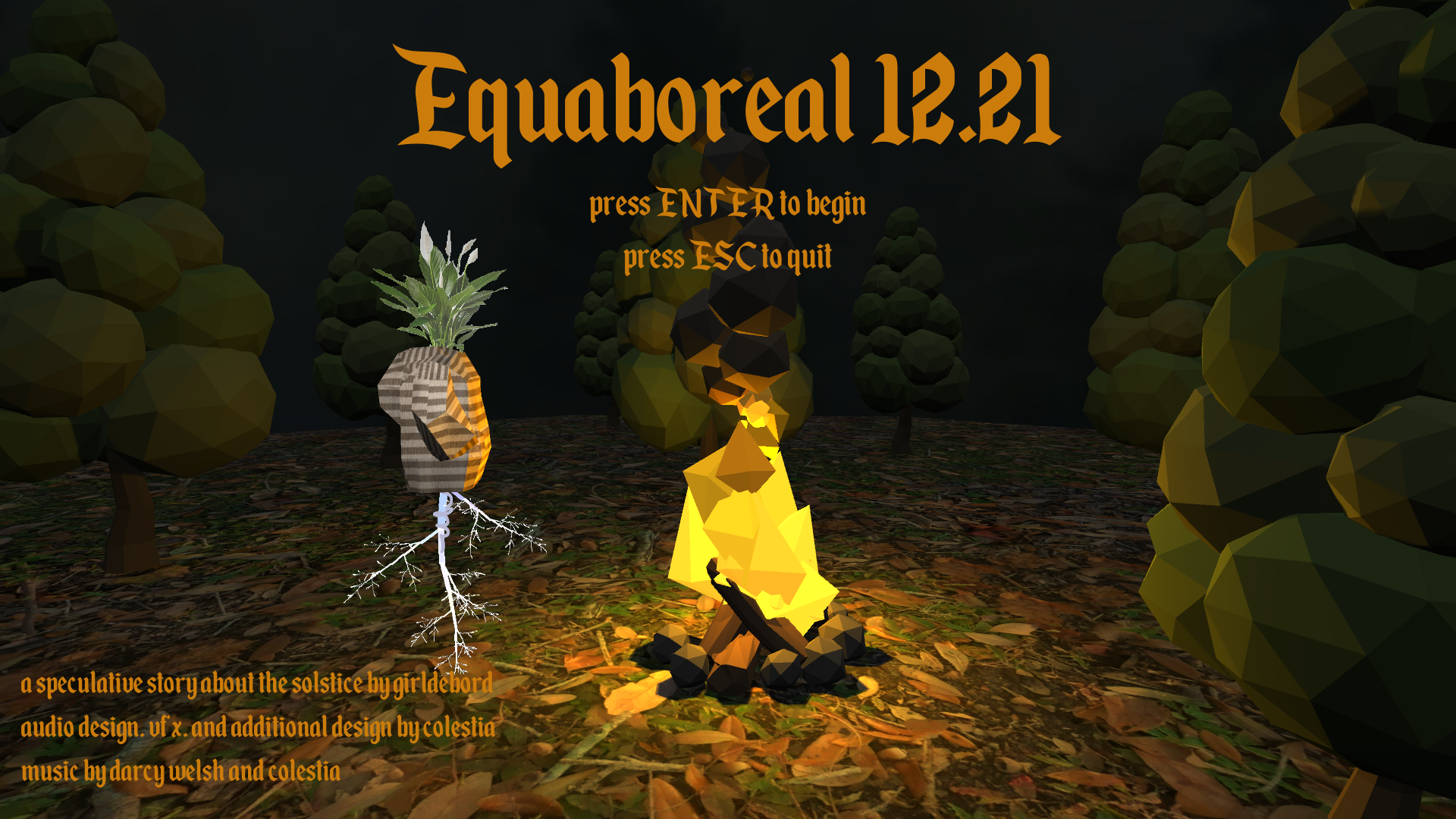 The Premise: A quick journey into a dark forest.
The Gimmick: You're a plant wearing a sweater.

Equaboreal, authored by Phoebe Shalloway, takes perhaps 10 minutes to play, and there's a sense in which it feels like an unfinished work or demo. But there's also a sense, one I'm feeling more strongly as the experience recedes, that it's just as long as it needs to be. 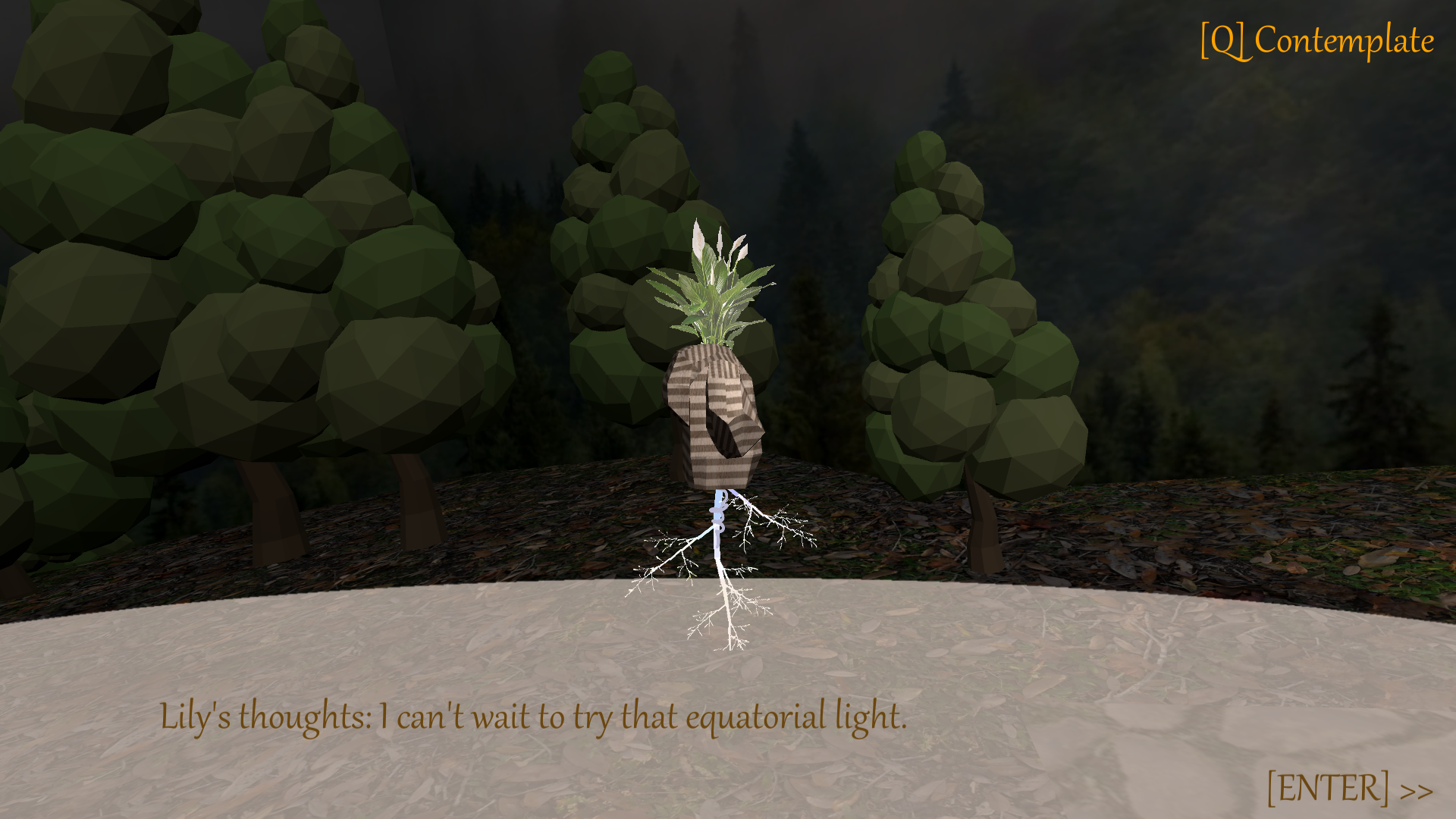 You are Lily, a plant person in a world of plant people, and the winter solstice is nigh. During this holiday, the plants rely on bottled light imported from southern lands, which they pour out -- so the tradition goes -- to keep spirits away. This year, the delivery plant bringing a batch of super-potent equatorial light failed to arrive, and a disappointed Lily goes searching for them. 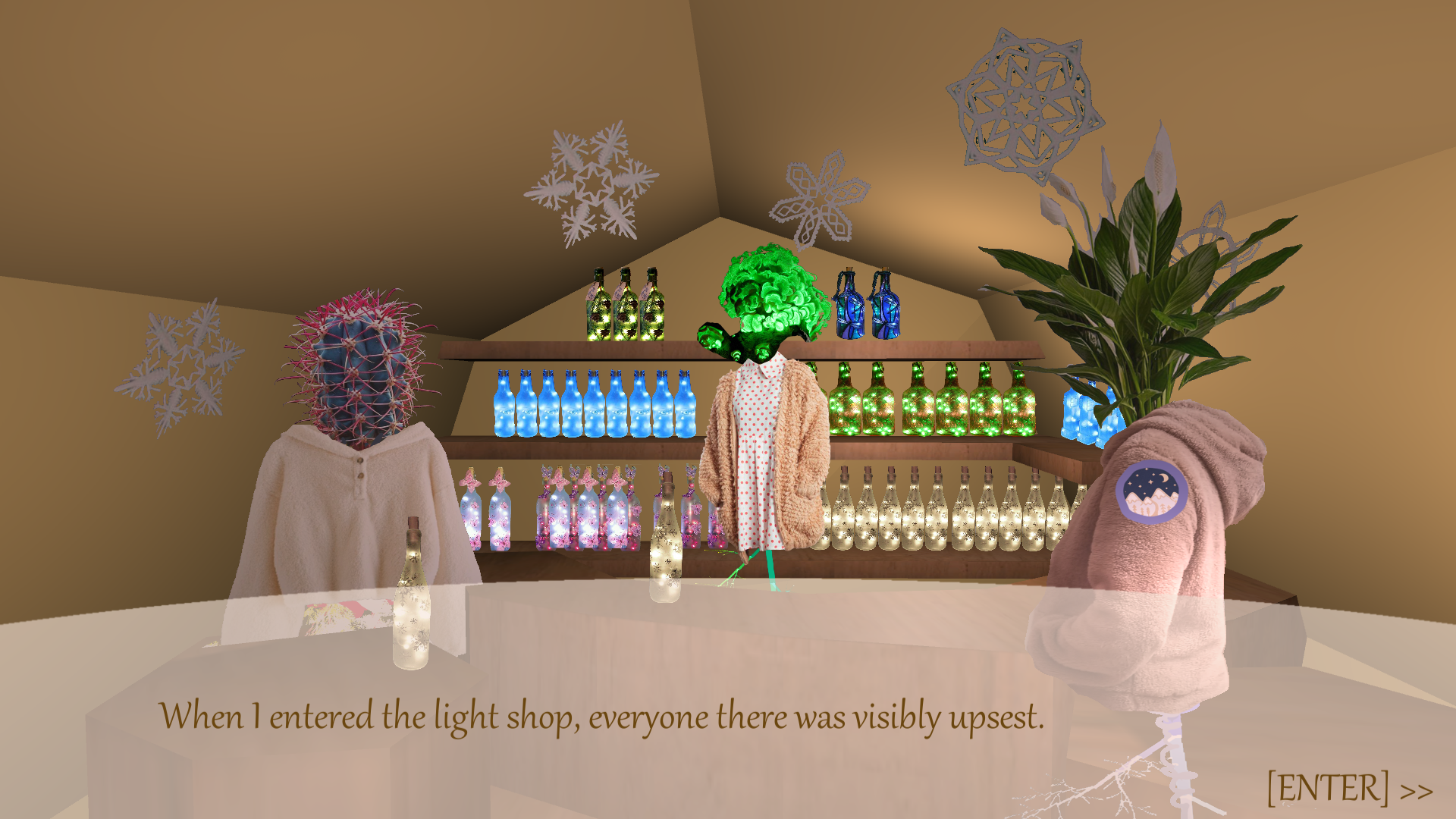 There's not much to do in Equaboreal, it's a straight path through a very short adventure. I said it takes about 10 minutes, but it's closer to 2 if you click through all the dialogue (although obviously you shouldn't do that on your first play). There are few actions to take and no dialogue options.

The graphics are simple and the characters are cut and pasted from photographs, like someone making a collage from magazine clippings. This primitive style kinda grew on me. I mean check it out, there's a plant wearing a hoodie, you don't see that every day. 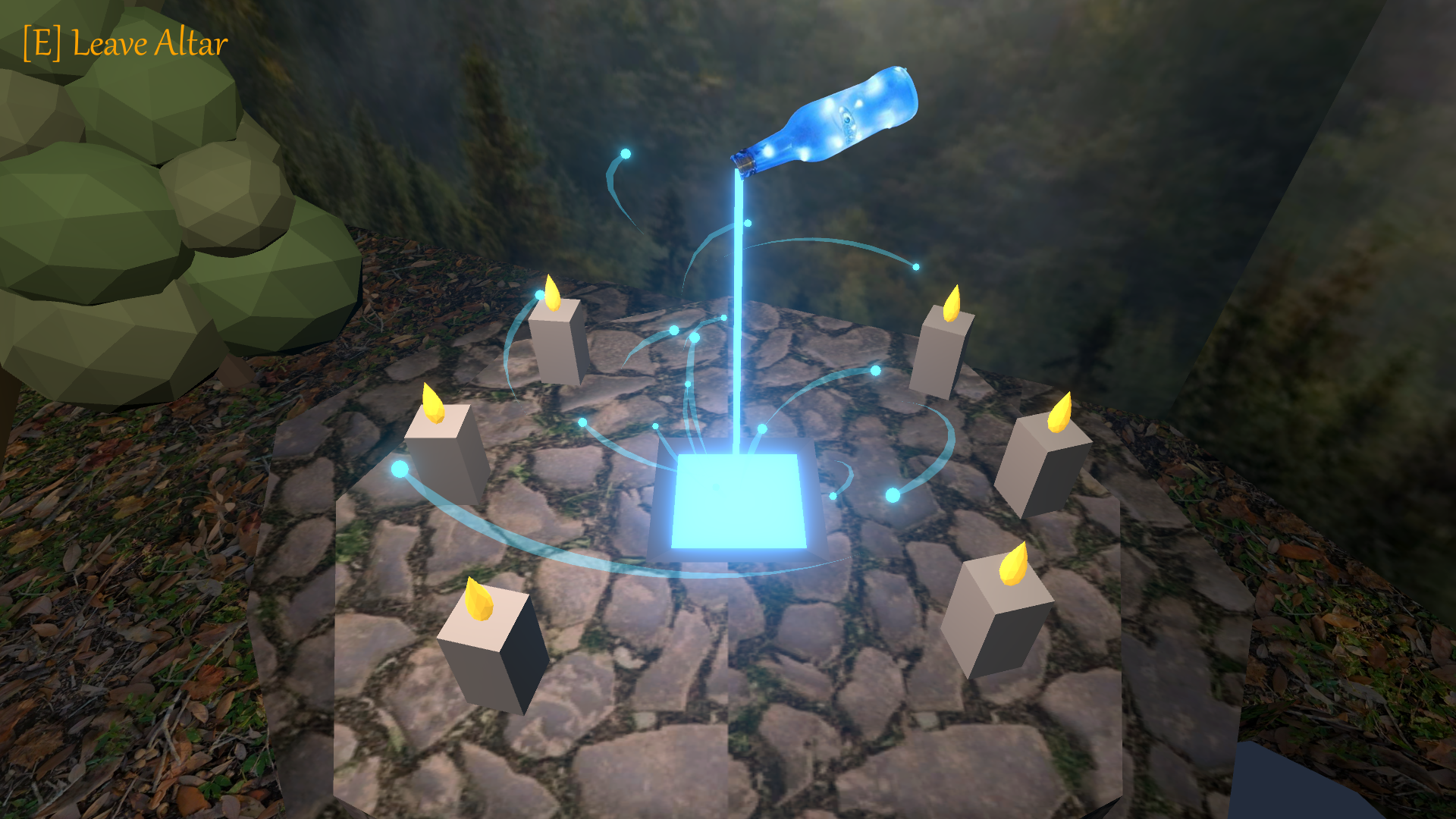 Much like the graphics, the worldbuilding -- such as it is for an experience this short -- ended up charming me with its simplicity. The handful of dialogues hint at things that are never explored or resolved. How did this tradition get started? Are these forest spirits really to be feared? What is the significance, if any, of the giant cogs seen in the forest, or of the hints that the climate has been changing? We don't know. I could imagine an expanded version of this game which addresses these concepts further, maybe builds on them to create a proper story. But there's also something to be said for what we did get: a quick 10-minute glimpse into this strange world, which ends exactly when it ends and not a second longer, and leaves you to speculate further should you feel like it, but if you don't that's fine too.

Was this a hidden gem? I wouldn't go that far, but the experience is so short it's not like I felt my time was wasted.

Did it explore concepts, tackle fresh ideas or overlooked subjects, or expand the definition of what games could be? A plant wears a hoodie.